David Chang is one of the most relevant chefs on TV at the moment.  A third culture kid, Chef Chang is the founder of the Momofuku Restaurant Group which are the holders of two Michelin Stars.  He published the cult food journal, Lucky Peach and produced and presented a Netflix series called Ugly Delicious.

Recently, Nike, the sporting apparel giant partnered with Chang to create a limited-edition Momofuku sneaker.  The denim on the shoe is the same blue as the apron Chang wears in his kitchens.  A peach, Chang’s most recognizable icon is stitched on the heel.  Inside on the sock liner are the numbers 163 and 207 which are the addresses of Chang’s first two restaurants in New York City.  They are currently going for about 1,300 AED – if you can find a pair.

Lexus has their brand experience space, Intersect, in Toyko, Dubai and soon in New York as well.  This restaurant space acts as a brand extension where people intersect with food, fashion, design, and entertainment.  Restaurants have always been a great storytelling canvas when done right and what is marketing if not storytelling? 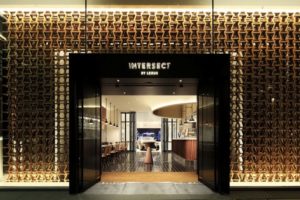 Hyundai Card, one of Korea’s largest credit card companies commissioned London design studio, Blacksheep, to create an F&B experience that provides an analogue antidote to the fast pace of city life in a digital world.  Spread over five floors, The Cooking Library includes a deli, bakery & cafe, library, and kitchen with an ingredients house and rooftop farm.

IKEA’s founder Ingvar Kamprad famously noted that the furniture giant’s best sofa sellers were their meatballs.  IKEA restaurants were conceived to stop people leaving the store and to spend more on flat pack furniture.  Visitors who have eaten in an IKEA restaurant, spend almost 25% more than someone who has not had an IKEA meal.

For years, global brands have been using the emotive power of F&B to help market their products or services, and I am surprised that hotels have not quite fully grasped this concept yet.  Surely hoteliers (other than Ian Schrager and Nick Jones) can see that one of their best room sellers might be their F&B?  Historically, the best hotel operators have understood the importance of marketing and F&B working closing together to drive business, but what if we move beyond just working “closely together”?

In its current form, the marketing function of a hotel has a responsibility to promote and market all hotel services, from rooms to banqueting, from spas to F&B, with a critical focus on rooms.  However, what if a hotel’s F&B became part of the hotel’s marketing department.  Instead of another revenue center to promote, F&B becomes a tool to sell and promote the rest of the hotel and support the brand’s positioning.  I’m not talking dotted line to marketing, I’m talking full-on commitment – that F&B becomes a marketing function.

What a mindset shift that would be, to treat F&B as a tool to sell rooms and strengthen the brand.  It might already be done in some respects, but as a fundamental shift in organisational structure, it could completely change how hotels treat F&B.

Traditional organisational structures are already being challenged in hotels like CitizenM, Radisson Red, and even our local Rove hotels.  Gone are the days where the General Manager lords over his lobby like a sovereign over his lands.  Now the staff are at the front line, leading the brand forward, so it is not such a crazy thought to question the role of F&B within hotels.  No-one understands the hotel brand DNA or guest profiles better than a good marketing director, and that is what’s missing in the dry world of hotel F&B today.  How can the F&B Manager or Exec Chef meaningfully connect with guests and communities when they are stuck in the nitty-gritty of managing food costs and perfecting operational flow or worst still when they are being egomaniacal monsters!  (it’s true, some do still exist)

The role of marketing has changed so much over the years.  Besides storytelling and engagement, community-centricity is now key, and F&B is the heart & soul of a hotel’s “micro-community.”  Therefore, there is a strong argument that says why not hand over the ownership of the F&B to someone who understands, lives and breathes that – the marketing director.

Just imagine what a smart marketing director could do with F&B if it sat on her P&L account as a marketing cost.  Would boring all day diners stay the same, or would they evolve into brand and lifestyle experience centres that tell the hotel’s story and work towards strengthening the emotional attachment between customer and brand.

Menu prices could be kept low and accessible, with low food margins treated as a marketing cost to give the very best product to the guests.  A financial investment could be made into hiring the highest caliber of staff – highly trained brand ambassadors that fly the flag for the hotel.

F&B revenue can account for a vast portion a hotel’s total income, especially in this region and of course, the operations will still need to be run by a dedicated F&B ops team.  A gaggle of omnichannel marketing executives trying to serve Martinis and tableside crepe suzettes is the stuff of nightmares.  However, my argument is the overarching strategy, drive and direction could be spearheaded by a marketing director.

It’s a significant change and will have massive implications for the hotel structure. New job descriptions will need to be written, marketing directors will probably have to be re-hired, or re-trained at the very least.  The role of the exec chef and F&B director will dramatically change, and there will be massive pushback from people in those roles – but sometimes changes as dramatic and extreme as this can yield surprising results over time.  Maybe it’s time to smash that glass box, flip everything on its head and evolve that hierarchy and organizational structure.

Or maybe not.  Thoughts anyone?