I must start with a dire warning for all men out there.  Carine at The Emirates Golf Club is possibly the worst restaurant in Dubai for a date.  Maybe even for relationships as a whole.  Once your partner finds out that Chef Izu named the restaurant after his wife, all your efforts will be compared to this, and you will be found wanting.  Here I was offering to go Dutch on the bill, and this chap over here just named a restaurant after his wife.  Thanks, Izu.

I purposely said nothing to The Serb about this little fact in the hope that her usual levels of culinary curiosity remained at the, “do they have burgers?” level.

We arrived to a couple of smiling, friendly hostesses.  After giving our reservation, the hostess quickly checked her computer screen and then exclaimed with quite some surprise, “we have your table ready!”  It was delivered with such infectious enthusiasm that we virtually skipped through the restaurant to our table.  Well, I did.  The Serb had a bit more dignity and maintained a safe distance in front of me. 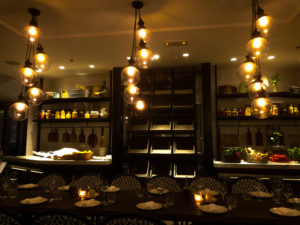 We sat at a table laid out with a simple linen table runner, with wooden handled knives and forks.  A large cloudy olive oil bottle loomed over the salt and pepper grinders and a bright yellow lemon added a splash of Mediterranean colour.  The similarities to LPM’s table set up cannot be avoided – even the salt and pepper shakers are the same.  The only thing missing is the tomatoes.  However, in LPM, the purpose of these table fruit remains a mystery as no-one ever attempts to explain their purpose to the guest.

Here at Carine, the waiter makes a wonderful little olive oil and balsamic dressing right at your table.  He sliced the lemon and squeezed it into the dressing, explaining that the lemon was flown in from Scilly and therefore wasn’t as bitter as the usual lemons.  I had visions of our lemon sitting in Emirates business class, headphones on, watching ICE and all the other lemons in economy, fighting over armrest space, getting more and more bitter.

Carine is an attractive and charming bistro with an open kitchen counter and French/Mediterranean styling.  The lighting is spot on, and there is a great feel to the room.  It is classical, yet youthful.  Retired couples (do they exist in Dubai?) playing golf would feel as comfortable here as a young power-hungry DIFC banker. (Do they still exist in Dubai?)

The staff are busy but efficient, knowledgeable and happy to engage in conversation.  The manager came over and introduced herself, welcoming us to Carine.  The Serb was very pleased with this, as we rarely get a manager to our table, preferring low-key meal experiences.  Unfortunately, this is where the manager decided to let the cat out of the bag and explained why the restaurant was called Carine.  The Serb, to her credit, waited at least 45 seconds before bringing it up.  “Izu named this restaurant after his wife?  That’s lovely,” she said, as she ripped apart an innocent piece of bread.  If I can translate that, I think she really meant, “Watch it, buddy – you better step up your game.”

We quickly ordered the Tarte Flambée and the Duck Confit Quinoa Salad to start followed by the Rigatoni with Beef Ragout and the Lamb Saddle.

Written in French, with English translation, the menu has hints of Le Petite Maison, but to make any further comparisons would do no justice to Carine’s menu.  In my opinion, it is better than LPM’s in almost every way.  It is classic, yet modern. It has substance but is light.  While LPM’s is built on tradition and nostalgia, Carine’s menu seems young, relevant and forward-looking. It is a Generation Z menu to LPM’s Baby Boomer menu.  It is resplendent with elevated bistro food – from fish to lamb to veal, where Mediterranean spices such as harissa and sumac live in harmony with Périgueux Sauce and Ratatouille.

The duck salad arrived along with the tarte flambée – onion tart.  Both were excellent, but the winner was the onion tart because, well, quinoa is quinoa and that only takes you so far.  Slow-cooked onions as soft as they were sweet, sat on a lightly baked flatbread crust with cherry tomatoes and dollops of sour cream.  The sweetness of the onions was balanced out by the sour cream, and the contrast came together wonderfully. It was a dish that got better with every single bite.

I think The Serb only ordered the Rigatoni with ragout because it was the closest thing to a burger (i.e beef) on the menu and also because it was the only dish she recognised amongst all the French.  However, I am delighted she did, because it was the surprise dish of the year so far for me.  It is a credit to Izu’s understanding of flavours that a simple meal can elicit such complexity from such humble ingredients.  It was umami heaven, layered with flavour, depth, and character.  It was superb, and I don’t use that word lightly.  You must try it.

The lamb was prepared with skill and finesse.  Cooked perfectly, it was tender and packed with flavour.  The parsnip puree took the potato impersonating vegetable to a whole new level.  Creamy, almost sweet in taste, it was a great support and balance to the savory lamb.

The manager came over to inquire about the food.  In her enthusiasm for her restaurant, she let another cat out of the bag.  She explained the olive oil on the table is from Izu’s private olive grove in Greece.  I closed my eyes.  Of course, he owns an olive grove.  I own a souvenir meteorite stone in a little plastic box.  A rock that came from out of space.  That’s just as impressive.  The Serb looked at me but said nothing.  Sometimes that’s even more dangerous.  I just hope she never finds out he sells his olive oil under the retail name Theo, which is his son’s name.

We decided to skip dessert, much to my relief – mainly because I was terrified that the manager would come back and tell us another amazing fact about Chef Izu.

Carine is a triumph.  A brilliant example of Chef Izu’s mastery of simple ingredients with fresh Mediterranean flavours.  The service was personable and charming, and the setting is casual, refined and modern.  I wholeheartedly recommend Carine and genuinely look forward to returning.

As we got home, I asked The Serb if she wanted some tea.
“Yes,” she replied, and then muttered under her breath, “he named a restaurant after his wife.”