Back in 2006, Jumeirah Beach Road underwent a “Beautification” upgrade.  Little did we know that it would become a strip heavily dedicated to boutique concept stores, health-driven cafes, cosmetic and dental clinics, and posh chocolate and flower shops – which is everything you need to be beautiful, right?

Mad Tailors is part café, part restaurant.  The all-day breakfast items scream café culture; however, the tapas and Mad mains show a more serious restaurant side.  Time will tell whether it can balance both genres.

The Serb and I visited early one chilly April evening and through positive thinking en route, managed to snag street parking right out front.  Life is good on the Beach Road. 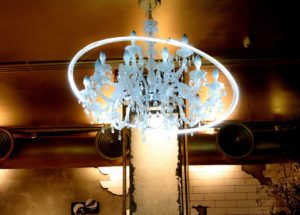 There is a large, illuminated “X” hanging from the façade of the building with a small outdoor seating area.  The temperature was below 26 degrees, and The Serb demanded we sit inside as she had left her Northface Thermoball Arctic jacket at home.  Inside Mad Tailors are around 15 tables, making a small but cozy space that wouldn’t be out of place in a hip residential neighbourhood of New York.

According to their Facebook page, Mad Tailors is inspired by Leonardo Da Vinci, Michelangelo and serves intimate MADiterranean food.  The décor is rough-luxe, and the distressed walls are brought to life by an ethereal, ghostly chandelier in the center of the room.  The dining room is framed by an arresting brass metalwork arch that gives the restaurant a new age renaissance cathedral feel.  The coffee counter at the head of the restaurant has an altar-like quality to it, backlit with an ecclesiastical glow. 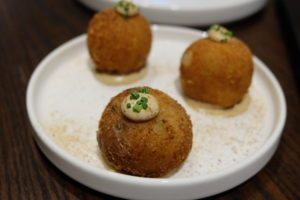 Mad Tailors is the creation of Fad Jokhadar, a Syrian/Greek interior architect who has emphatically stamped his distinct personality into this restaurant.

The man behind the menu is the very talented Mohammad Orfali who is what I call a thinking chef.  Not only does he whisk and flip and broil and bake, but he also seeks out knowledge and understanding of cuisine and culture as well.

Chef Orfali also partners with other culinary talent, using Mad Tailors as a pop-up playground for him and his chef friends.  He has partnered with Omar Rodriguez from Slab and Reif Othman from Play and Zuma for various pop-up dinner events and you should definitely keep an eye out for future collaborations as well.

(On a side note, Chef Reif is a busy man at the moment and has been associated with roughly 80% of all GCC restaurants recently.  Rumour has it he has managed to clone himself, hence being able to be in Beirut, Dubai, and Egypt seemingly simultaneously.  Either that or Mad Tailor’s Cathedral Archways create a portal to the Quantum Realm.   Yes, I did just watch Avengers Endgame.  I’m not crying.  You’re crying.) 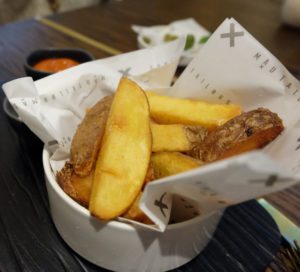 Mad Tailors wasn’t busy when we entered, and we were  quickly shown to our table by a welcoming waiter.  The manager on duty was energetic, switched on, and she gave Mad Tailors a good neighbourhood restaurant feel to the place.  I like managers that have a waiter’s pad in their back pocket, ready to take an order themselves, rather than politely offering to “fetch my waiter for me.”

The menu teeters between progressive and conservative.  Dishes like the baby gem pistachio were inventive and refreshing, but the chicken avocado salad is a reminder that they still need to serve “commercial” food.  Overall, the menu is a robust bistro menu with some bright flavour combinations, like horseradish and salmon, and chicken with truffle crumbles.

From the tapas section, we ordered the Patataes and the Cordon Bleu croquettes.  We decided to opt for a salad and mains to share.  We ordered the Halloumi & Herbs salad, or as the Serb calls it, the squeaky cheese salad.  For the mains, we went with the beef stroganoff, which, as everyone knows, was Michelangelo’s favourite TV dinner after a long day of upside-down painting. 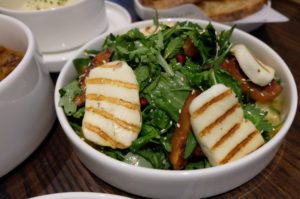 We also ordered the sourdough bread as well, because I suffer from Carb FOMO.

Have I told you how much I enjoy balls?  Well, ball-shaped foods more specifically.  Arancini, cheese balls, Xiaolongbao – stick anything in a ball shape and I’m in.  The cordon bleu croquettes arrived, dutifully following the unwritten rule that food must be served in odd numbers only. Three little crunchy balls filled with a rich, creamy chicken and cheese puree, topped with a mushroom mayo.

The patataes, (which is how you say potato if you’re a frightfully posh Surrey farmer or from Boston), were triple cooked fries and delicious.

The halloumi and herb salad was fresh and spritely and the herbs combined to create a choral symphony of flavours in my mouth.  The coriander played off the mint, that gave way to the parsley that allowed the halloumi to squeak falsetto, as halloumi is prone to do. 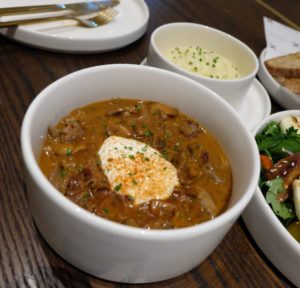 Although not an obvious choice for a MADiterranean food direction, the stroganoff was rich, thick and well balanced.  The beef was tender and soft, and although the dish appears to be simple comfort food, it requires several hours at the stove to get it right.  The sauce has to be slightly tangy, which is where a dollop of sour cream comes in and the seasoning requires a delicate hand.  Mad Tailor’s kitchen got it right – it was a delicious and generous portion.  However, as a winter comfort dish, I am not sure how it will fare the coming summer months.

We finished off with a Chocolate Mille Feuille and the lovely manager brought over a complimentary Torrija as well.  The Torrija is a Spanish French Toast and was head and shoulders better than the Mille Feuille which should have been delicate and light but unfortunately wasn’t.  The Torrija brioche bread had a crème Brulee style shell which gave a satisfying crack each time you took a spoonful.  It was a heavy dish, and one we couldn’t finish after our equally heavy stroganoff – not if we wanted to walk out with any grace and dignity anyway.

Mad Tailors, is a 40-seater restaurant that proves you don’t need to be highly polished to be beautiful, especially on Jumeirah Beach Road. 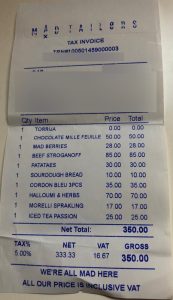 One more thing – I’d like to invite you all to my Facebook Group. It’s different than a regular Facebook page. It’s more interactive, and personal. It allows you to see fresh content quickly and directly. It allows you to cut through all the unnecessary social media noise. Be a part of a food community where you have access to reviews, articles, supper club invites, The 86 food journal and much more. Click below and be a part of community where humans and food connect.