Tom and Serg in Al Quoz was a breath of fresh air for the Dubai casual dining scene, back in 2013, with their hipster cool staff, casual laid back attitude and solid food and beverage programs.  They blazed a trail for the rest of the casual dining market and set the standard in café culture, oiled beards and tattoo sleeves.

They also scored home runs with the next two places they opened, The Sum of Us and Common Grounds and all three cafes have their own distinct core following.  They introduced us to a crazy new drink called a flat white and turned all of us into coffee snobs.

Next came The Brunswick Sports Bar (Let’s forget about Muchaha and Uncle Jheff) which was an edgy, grown-up sports bar that had a certain confidence and panache.  I even wrote a review about it and I think I called it “an achingly retro sports bar with some modern-day upgrades on a backdrop of industrial décor.” It was original and classy and it’s safe to say I was and still am a bit of a fanboy of the Bull & Roo team.  If Bull & Roo made merchandise, I would totally buy it.

Therefore, I was surprised when I heard that The Brunswick had undergone a renovation and rebrand, just a couple of years after opening.

Walking in, the change is immediate – The New Brunswick is moody, darker and much more serious than its predecessor.  Black tables and chairs are scattered across the concrete floor and the kitchen and bar are clad with dark shiny subway tiles.  There are minimal accessories, and a several planters dotted around the space.  For me, it, unfortunately, lacked a story or premise.  I found it difficult to connect to the space and wasn’t sure what vibe I was picking up.  Bull & Roo always operate clearly defined concepts with strong storylines, but this reincarnation of Brunswick needed that famous magic dust they usually sprinkle on things.

There was no-one at the entrance to greet us, so we wandered around for a while and eventually grabbed a table in what they call their lifestyle eatery.  I don’t know what that means, I think it’s just a pompous dining room.

Eventually, we were handed two food menus, despite there being four of us, and had to ask for two more.  After several additional minutes, the waitress finally brought us two drinks menus.  I didn’t want to make a fuss as perhaps this whole sharing concept has evolved to include menus too.  We hot bedded the menus and worked out a page sharing system to speed things up.

The new menu takes itself very seriously.  There are dishes with things like sherry vinegar gel, cultured creams, and charcoal mayonnaise.  The menu comprises medium sharing, large sharing, and sides.  There are dishes like grilled quail and monkfish cheeks. The Serb asked quietly what the difference was between medium sharing and sides.  It was a good question. In a move that implies they perhaps are not so sure of their new menu themselves, they have also included party favourites such as bar bites, pizzas, and burgers.

I applaud them for pushing the boundaries, and the menu reminded me a little of Folly’s menu, by Nick and Scott, which is a compliment.  However, nothing really stood out for us, and no dish demanded our attention.  It might have helped if the service team had shown some enthusiasm, taken the time to explain the menu and sold us on a few dishes, but they could barely make eye contact with us, let alone conduct an engaging conversation about the new kitchen direction. 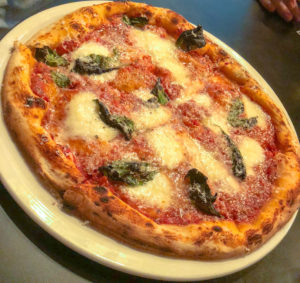 In the end, we went for the safe options and ordered all three burger choices and the Neapolitan pizza.  As we ordered the triple cream brie burger and the Shropshire blue burger, I felt my arteries thickening and my heart rate increase.  To counterbalance that, we also ordered the crispy grain burger, made up of lentils, quinoa, mushroom, buckwheat and other great things you would feed to a rabbit. A balance was restored, kind of.

The grain burger was surprisingly good and even more surprisingly turned out to be the star of the lunch.  The brie burger was severely undercooked and was inedible, and the blue burger barely passed the mustard.

Then came Pizzagate.  Our server quietly dropped a pizza into the middle of the table and made a quick getaway.  However, the Serb, when hungry, has all her senses heightened and noticed immediately that it was the wrong pizza.  Amazingly, the server also knew this and explained our pizza had been taken to the table next to us by mistake, but we could have this one instead.  The old switch and bait pizza trick.  We politely declined and said we would wait for the Neapolitan.  On the way back to the kitchen, the server tried to offload the unwanted pizza onto the original table, but they also declined, having rather enjoyed our pizza.  Rumour has it, that pizza is still trying to find a home today.

Our correct order eventually arrived, but by then the burgers had been eaten, and our whole meal experience had ceased to be.  To rub salt in the wound, the pizza was effectively raw dough with some luke-warm toppings and was unfortunately left uneaten.

The Brunswick Eatery Bar and Terrace has a long way to go to reach the high levels of the rest of Bull & Roo’s portfolio.  The food was a big let-down – burgers and pizza are not the hardest of food to get right.  However, more importantly, a few of the staff seriously let down the brand with their lack of customer care and attention to detail.  To their credit, the pizza was removed from the bill, but that is not a long-term solution for what they need to do to improve.

As we left, heartbroken and hungry, not a single member of staff attempted to say goodbye or even acknowledge our departure.  Bull & Roo, I still love you, but I’m going to stick to Common Grounds in the future. 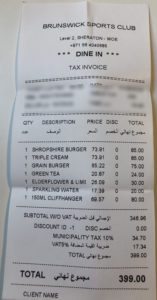