Although El Mostacho sounds like a movie directed by Robert Rodriguez, starring Danny Trejo, it is, in fact, a taqueria or taco shop in JLT, run by Isaac Mendoza and the Bystro group.  Isaac and his brother used to run La Taqueria in Business Bay, arguably Dubai’s best taco joint.  When they closed their doors last year, there was a taco shaped hole in the city’s culinary fabric. 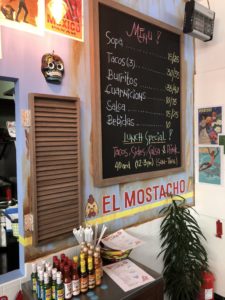 Admittedly, I didn’t know it was Isaac’s new place when I went there for a quick lunch one afternoon and had to stop myself from giving him a hug when I saw him.  You have to be so careful these days about unwanted affection.  Apparently, Netflix has created a policy that says you can’t stare at anyone for longer than 5 seconds otherwise it’s harassment.  They should never film in Deira.  Anyway, I digress.

As a restaurant, El Mostacho is about as big as a mustache.  Taking over a tiny sliver of the Silver Tower, in Cluster I, El Mostacho has nearly enough seats for the Mexican football team squad.  The seven-a-side team, not the full squad.  It is just like a taco stand from Baja California, where you perch against a counter and grab a quick taco or a bowl of tortilla soup.  It is welcoming and intimate, with no pretence or agenda except to serve excellent tacos and burritos.

The décor is fun and straightforward, and even the menu encourages you to not take life too seriously.  The space looks like they raided an old Tijuana travel agency.  There are posters, plates, and textiles on all the walls advertising the beautiful country of Mexico.  On the countertops are Mexican recipes books, Calaca figurines, little ceramic cacti and trompos – little toy spinning tops.  It is cheerful and uplifting.

Globally, Mexican food has unfortunately been somewhat high jacked by hipster food truckers, serving line caught fish tacos with sriracha and deep fried crushed kale.  They have become pretentious, complicated and a slave to the “Gram.” 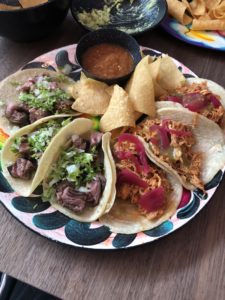 Luckily, El Mostacho has stayed true to their origins, and their menu is small, traditional and authentic.  Tortilla soup, burritos and tacos, a couple of drinks and some guac.  There’s your menu, and that’s all you need.  We ordered the guac and chips, a couple of burritos and a couple of tacos.  Isaac served us, but the kitchen was right there, and we could have just called our order out to his brother directly.

The barbacoa burrito is like a big warm, familiar hug.  The soft flour tortilla wrapped tightly around slow-cooked shredded beef, with rice, beans, lettuce, salsa and melted cheese.  I’m pretty sure that’s all the food groups you need.  There is something deeply comforting about a soft, warm, thick burrito.

Then came the tacos.  I want to talk about the taco tortilla for a minute.  The tortilla is the vessel from which you create the taco, and you don’t just decide one day to start making perfect tortilla.   The Mexicans have been making tortilla since before they were even Mexican.  Their understanding of corn and its characteristics are legendary, passed down from generation to generation.  A real corn tortilla is a dull yellow and smells like fields and crushed corn kernels.  It tastes like artistry and legacy.  El Mostacho’s tortillas are home-made and guaranteed it’s a recipe his mother got from her mother and so on.

El Mostacho’s tacos are the real deal.  Home-made corn tortilla, filled with marinated grilled meats with radish, cilantro, and pickled red onions.  They are little envelopes of hope, consumed in about three delicious bites.  The Carne Asada was better than the Pollo taco, but that’s like saying Messi is better than Ronaldo.  Either one would make your fantasy football team.  But Messi is better.  Except at penalties.  However, neither are very good at paying taxes. 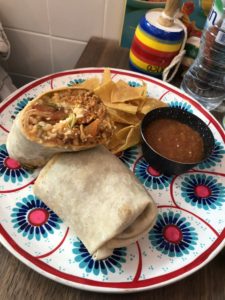 The service is Isaac, who is always four steps away from any point in the restaurant.  He is genuine and friendly and cares deeply about your enjoyment of his food.  I mentioned in my review of La Taqueria that it was like going around to your friend’s house and El Mostacho has the same vibe.  It is chilled, informal and heartfelt.

I genuinely don’t think a city is complete without a place like El Mostacho.  I suggest you stop by and support your friendly neighbourhood taco place as soon as you get the chance.  You won’t be disappointed. 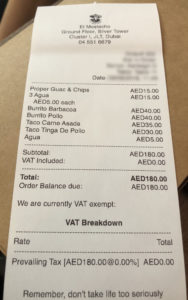