Yauatcha, Wagamama, Busabai, Hakkasan, and Babaji – they may sound like some Asian superhero group, but they are, in fact, serial restaurateur Alan Yau’s portfolio of restaurants, with chopsticks and expensive fit-outs as their weapons of choice.

Babaji is his latest restaurant to make it to Dubai from London.  It is a pide salon – basically a casual dining Turkish pizzeria.  It follows his tried and tested method of taking ethnic cuisine and diluting it for the mass market.  I don’t say this negatively – Wagamama, another Alan Yau creation, is a phenomenally success Japanese restaurant, but there is a reason they haven’t opened in Japan, and there is a reason Babaji won’t open in Turkey.  (Watch now as he announces a flagship Istanbul store!) 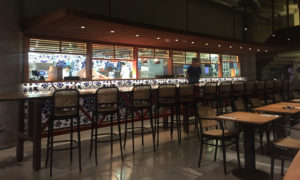 It’s located at City Walk, which is becoming a five-star mosh pit for international restaurants.  When the Serb and I entered, there was a nice buzz to the place although plenty of seats were still available on a weekend night.

Our host greeted us pleasantly enough and was then subject to a bloodless coup when an over enthusiastic waiter took over seating duties from her.  He strangely gave us a choice of a hot table or a cold table.  We ignored his question, and he sat us at a window seat.  The Serb gave him a glare, and we never saw him again.

Babaji is well staffed – we had interactions with no less than five different team members.  Some were overly chatty, and some approached the table as silent as the night and disappeared again.

The restaurant is anchored by two large pide ovens that look like giant albino minion twins.

The interior décor is, surprisingly for Mr. Yau, rather restrained and sensible – the foundational canvas is quite bare – exposed concrete, simple tables, and chairs, but accented by some rather eclectic and beautiful blue Iznik tiling throughout the open kitchen and restaurant.  It has a nice feel and works well with the overall positioning of the concept.  There is a very high ceiling that causes havoc with the acoustics, and it does get a little clattery in there.  Yep, I think I made up a word. 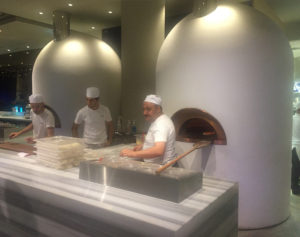 The layout of the space was not how I would have done it.  It was as if they built the perfect kitchen first and then put some tables and chairs in whatever space was left over.  The restaurant is anchored by two large pide ovens that look like giant albino minion twins.  The tables wrap around a generous back of house area, and there is a long communal table with the chairs facing directly into the kitchen like an Anatolian last supper.  Needless to say, those 20 seats remained empty all night.

The menu, I like. It is a Turkish brasserie style menu reminiscent of the Balthazar layout.  A single card with a concise selection of pide, meze, grills with some desserts and soups as well.  I’ll be honest – there was nothing on that menu that didn’t sound delicious.  Alan Yau knows what people want, before sometimes even they know it.

There is a disclaimer that says, “loosely inspired by true events.”

We ordered a couple of pide, the Mevlana and the four cheese, some hummus and bread, a beetroot salad and the kulbasti.

The food arrives randomly and without logic – but in some way, that’s quite charming.  The humus made a solo appearance and had to wait several more minutes for the bread.  You could tell it was embarrassed to be there alone.  The kulbasti, a hot dish, arrived before the beetroot salad, which was very apologetic for being so late.

The pides know they are the star of the show, so they arrived long after everyone else and without a hint of apology or regret.  All other dishes quickly move out of the way to allow them center stage on the table.

For the purists though, I think this is a light version of regional Turkish cuisine.  Imagine Babaji as a true story movie, but at the start, there is a disclaimer that says, “loosely inspired by true events.” But that is not necessarily a bad thing at all. 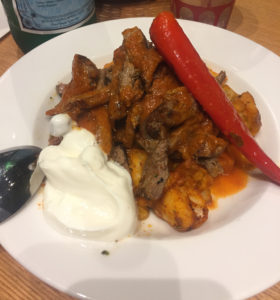 The hummus was average – quite thick with a rather neutral taste and very forgettable.  There are hundreds of restaurants in Dubai that have mastered hummus, but Babaji isn’t one of them, unfortunately.

The service was good, but our waiter needed to chill out a little – He asked us repeatedly, how each dish was – and he didn’t want a cursory smile and thumbs up.  Oh no – he wanted serious details.  He probed and used open-ended questions. – Sometimes even the same question in a different way to gauge consistency in our answers.  He was terrifying. At one point, I think I saw him wheeling a car battery and some jumper cables over to another table.  In hindsight, it was probably just the bill.

The kulbasti is strips of tender lamb over cubes of bread, covered in a tomato sauce.  It was served in a small bowl, and it should have been a well-constructed dish.  However, the tomato sauce was a little watery and again quite mild in the spice and flavour department.  Thankfully, the meat was good quality and seasoned well.  The Dubai flavour palate is more demanding of spices, and they might need to tweak their recipes a little in the future.

The beetroot salad was a generous bowl of lightly coated mesclun leaves with cherry tomatoes and red and yellow beetroot and pomegranate.  Fresh, lively and on point.

The two pides we ordered arrived piping hot, glistening with melted cheese and promises of salty, carb heaven.  They didn’t disappoint, but they didn’t blow me away either.  The Mevlana pide was with lamb, beef sausage, and kasar cheese topping.  The sausage meat was far too delicately spiced and fell a little flat for me.  However, the base was light, slightly chewy and was pulled from the hot stone at exactly the right time.  The four cheese pide was on point – slightly oily, great mouthfeel and extremely satisfying.

Despite the albino minions, and the car battery questioning and the disjointed food arrival, Alan Yau has created in Babaji, a charming and satisfying casual dining experience.  Babaji does the same for Turkish food as Pizza Express did for the pizzeria.  It’s not clever enough to reach the cult-like status that Wagamama once enjoyed, but it certainly won’t join the scrap heap of restaurants like his ill-fated Naamyaa Café did.

If you are in the area, stop by for a satisfying substitute to Pizza. 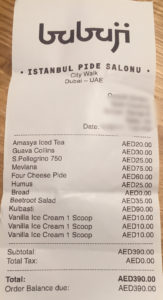