If Jones the Grocer and Lime Tree Café had a love child who was Greek, it would be Wooden Cellar, in Sports City.

As high rent becomes more unfeasible, independent restaurants owners are moving to less obvious locations in the hope of being able to afford to pay their staff and put a little back in their own pockets.

Wooden Cellar is a neighbourhood Greek Deli, a local hangout for the residents of Sports City.  It’s a little tricky to find, which is why it seemed to be full of dads with their young kids, celebrating their escapes, or lamenting their temporary banishment from their homes. Either way, they move with a confidence of men that were unlikely to be found by their wives. I thought I heard one child ask his father when they were going home. He was allowed another piece of honey cake for his silence.

The space is quite welcoming, with wooden arches, long kitchen-style tables, well-stocked deli fridges and shelves filled bread baked into the shape of crabs and alligators – those famous Greek animals. Jars of Greek delicacies can be found in small nooks, and you are naturally inclined to explore the place, to see if you can find any other wonders. I found several trays of eggs (honestly) and wondered to myself if they should be in the fridge or not.

Neighbourhood cafes, like Friends Avenue, Arrows and Sparrows, and Wooden Cellar play such an important role for Dubai – much more so than we first think. A good neighbourhood joint will become a third place for the community, a social space where people feel more connected and less stressed, where friendships are formed and strengthened, community problems are solved, business deals are struck, and fathers hide from their wives. Neighbourhood restaurants are the unsung heroes that create the dynamic streetscapes (yes, that is a word) that all good urban developments strive for.

Brillat Savarin, the famous food writer, once said, “To receive guests is to take charge of their happiness during the entire time they are under your roof.”  I use this quote as genuine, heartfelt advice to the owners of Wooden Cellar.

I’m not sure if our waiter was one of a set of triplets working there, or had the world’s shortest memory, but we had three interactions with him – he looked surprised to see us every time and seemingly had no recollection of our previous discussions. In a local restaurant, you would hope that the service staff are that little bit warmer, that little bit friendlier, a touch more concerned about your experience and show a desire to establish a connection with their community. Those are the basics, and they need to be done well.

We seated ourselves and eventually asked for a menu. Our server gave us the menus and looked confused as to where we had come from.

The menu is filled with appetizers such as goats cheese truffles, orange cauliflower and potato spetsofai. They have all time classics that must be a nightmare for their twitter account – Dishes like Tiganopsomo and Tirokafteri that just roll of the tongue and cheeky little desserts like a Portokalopita or a Karidopita. If it all sounds Greek to you, then that’s because it is.

However, we were there for breakfast, so ignore all the dishes I have just written. Focus on the below.  (Although the menu did look good.)

The Serb claimed she knew what breakfast I was going to order. She said it with such a smug confidence that when she was correct, I told her she was wrong and ordered something else. I ordered the fried eggs in herbed yogurt even though I wanted the omelet. She ordered the BLT sandwich. Which I knew she was going to order.

The best thing about the menu was that there wasn’t a smashed avocado, chia seed or acai bowl in sight.

I wish we had saved our exploring for after we ordered, as it would have given us something to do, while we waited for our breakfasts to arrive. It did take quite some time, and even the Serb, who can make a small cappuccino last an entire Eid weekend, started to tap her watch.

My order was two fried eggs on top of a naan bread with a sundried tomato pesto yogurt, baby spinach, and crumbled goats cheese. Yes, it was as good as it sounds. It was like a breakfast pizza/pide – and who doesn’t like pizza for breakfast. My only gripe would be that the naan bread could have been baked longer – it was a little doughy. But apart from that, it was well worth the wait.

The Serb had the BLT which was a monster of a sandwich – two slabs of toasted, crispy brioche, with caramelized beef bacon, fried eggs, and gouda cheese. It was far too big for such a dainty appetite, but a sizeable dent was made. The brioche soaked up the egg yolk, the beef bacon was sweet and sticky with a caramelized glaze and went well with the gouda cheese and crispy lettuce.

Wooden Cellar impressed me – I do like to support local businesses, and they seem to take pride in what they do. The food has a home-cooked quality to it, and I hope they manage to resonate with their community.

If you live in Sports City and have a missing husband, check Wooden Cellar – he’s probably there. 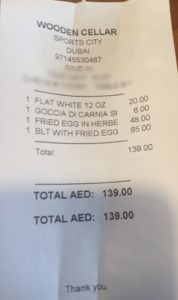