Back in the 1990’s celebrity Chef Keith Floyd opened a small pub in Devon and called it “Floyds Inn” with the word ‘sometimes’ in brackets underneath.  A tongue in cheek acknowledgment that he would most likely be drinking a big glass of red somewhere on the French Riviera.

Torno Subito reminds me of the same – a translation to “I’ll be right back” in Italian is a cheeky nod that Chef Massimo Bottura is most likely in Modena, Italy – but he’ll be right back. 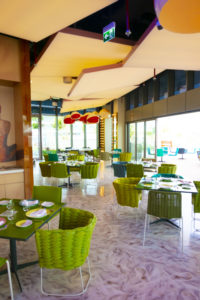 However, it’s important to note that this restaurant doesn’t feel like a typical celebrity chef outpost. Massimo’s name is not blazed across the entrance like a homing beacon for culinary tourists.  The menu makes no mention of him, and the staff act as if he doesn’t exist.  Massimo who? they reply when asked. The only reason you would know he’s involved is the single graphic of him staring at you as you enter.

This is manager Barbara and Chef Bernado’s restaurant.  Massimo has clearly handed the keys to his Alfa Romeo to these two.

Torno’s design is inspired by the Italian Riviera of the 1960s as seen through the eyes of Massimo Bottura.  Tucked away at the end of a sci-fi corridor at the W Palm, Torno Subito is playful, eccentric and quirky.  There are touches of Riviera glam alongside cartoonish, Alice In Wonderland style elements.

The light shades are oversized beach balls, the booths remind me of the colourful beach huts you could rent, and the floor is polished to look like a sandy beach.  I don’t think there is quite a restaurant like it in Dubai.  The designer, Dubai based Paul Bishop, did an excellent job of understanding Massimo’s view of the world, which is complex, profound and often filtered through a child-like wonder and enthusiasm. 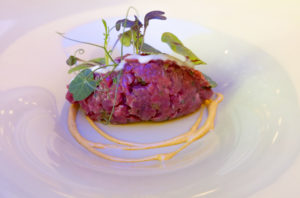 The open and breezy seaside feel is helped by the open plan kitchen and bar, giving a beautiful flow to the space.  Being able to see the kitchen communicate and create is a magical thing.  Many open kitchens struggle with keeping the noise down, but as most Italians talk with their hands only, Torno’s kitchen was almost silent.  Except in the back of the kitchen, out of sight, it sounded like there was a parsley chopping competition going on.  Based on the tempo and enthusiasm of the chopping, these guys were some of the finalists – it didn’t sound like amateur hour back there.

Our table was served by five different people, who all were very friendly and chatty, but I like to build a rapport with one person.  It helps me connect with the restaurant and provides me with a comfort and consistency that I desperately need in my life.

One of our servers was a young Italian man who had just arrived at our shores.  He mentioned that he was worried about the Dubai summer heat.  We told him he was likely to burst into flames at any time between June through to October.  We had a good laugh about it together, but I think I saw him sobbing by the gelato cart as we left. 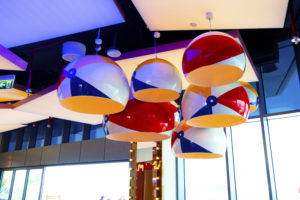 We ordered the beef tartare to start, followed by the Torno Subito pizza and the tagliatelle ragu.  Another one of our servers, a bright, cheerful woman from Modena, expertly sold us on a side order of a cheese stuffed baked potato, because we clearly hadn’t ordered enough carbs.

The ragu is apparently the same that is served in Osteria Francescana, Massimo’s flagship restaurant in Modena.  According to one of our friendly and smiley servers, it is slow cooked for a million hours and uses 3 hundred different cuts of beef.  Or something like that.  Torno’s ragu is not minced beef, but chopped, in the same way a tartare is chopped.  It has a creamy, smooth, silky texture as if Chef Bernardo cooked it with a velvet spatula while Andrea Bocelli and Ed Sheeran sang Perfect Symphony over his shoulder. 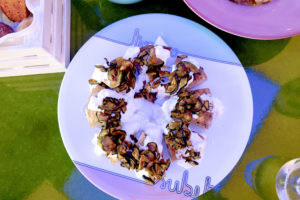 You can order medium or large portions of the pasta, but it is so decadent and rich that a medium portion was plenty for The Serb and me.  Mainly me.

We also got their gourmet signature pizza, because, Dubai.  The pizzas are not subtle or delicate.  They mean business.  A large sourdough base with an explosion of creamy stracciatella cheese, Italian ham and apple mustard.  Unfortunately, the ham hadn’t arrived from Italy yet, so it came with slivers of zucchini carpaccio instead.  Which also meant they remove 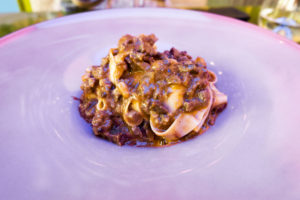 d the apple mustard.  It was still good, but you really can’t go wrong with bread and burrata in my opinion.

We ended the meal with some gelato, which was overindulgent and utterly unnecessary on our part. However, such was the playful nature of Torno that I felt compelled to mix a spoonful of my hazelnut ice cream into my espresso.  I took a sip and looked proudly at The Serb.  She rolled her eyes and asked for the check.

Torna Subito is a great little Italian. It has bags of personality and a serious kitchen team managing the recipes.  It’s well worth a visit, and if it was on the mainland, it might even turn into my regular haunt.