“Twenty dirhams for company,” used to be the response when asked how much for a car wash at a certain Dubai mall.  The implications clear in his well-scripted answer.  The company will take all 20 dhs, and there is nothing for me.  I usually handed over 25 dhs.  Sometimes 30 if the car is filthy or it’s crazy hot outside.  They now have a new approach though.   Now it is a straight 26 dhs – presumably, a strategy that banks on shoppers not wanting to wait for 4 hot little coins to be handed back.

I watch as the petrol pump guy gently coaxes the last few drops of ‘Super’ into the tank to make it a round number.  As I usually round up to the nearest ten, I secretly hope the amount falls on a number that ends on a 4, 5 or 6.  Because anything less than a 4 is too much tip and anything above a 6 is too little a tip, and then it becomes awkward.

However, everything about tipping is awkward.  How much is enough, and do different industries work off the same rates?  The restaurant industry should be between 10-15% but what about the grooming industry, for example.  Do you tip your mani and pedi lady?

However, as technology improves, and cashless payment becomes more and more part of our daily transactions, where does that leave the delivery drivers and servers and bartenders and taxi drivers and valet guys.  I’m not in the habit of carrying a stack of 5 or 10 dhs bills around with me – the Serb would get suspicious as to where I’m going with a stack of small bills.

As a result of using Apple pay and delivery and taxi apps, do Careem drivers no longer get tips, and how many Deliveroo delivery drivers have to leave the office lunch order with the receptionist without getting a tip?  As you remove the cash from the transaction, are you also removing the triggers to tip?

Sure, some of the delivery apps allow you to add a driver tip when you place your order, but that defeats the whole purpose of a tip.  What if the driver is a real jerk, or has eaten half your food on the way over, or parks his bike on your prize-winning Chrysanthemums.  You’ve already tipped him, and you are left to salvage whatever you can from your flowerbed. 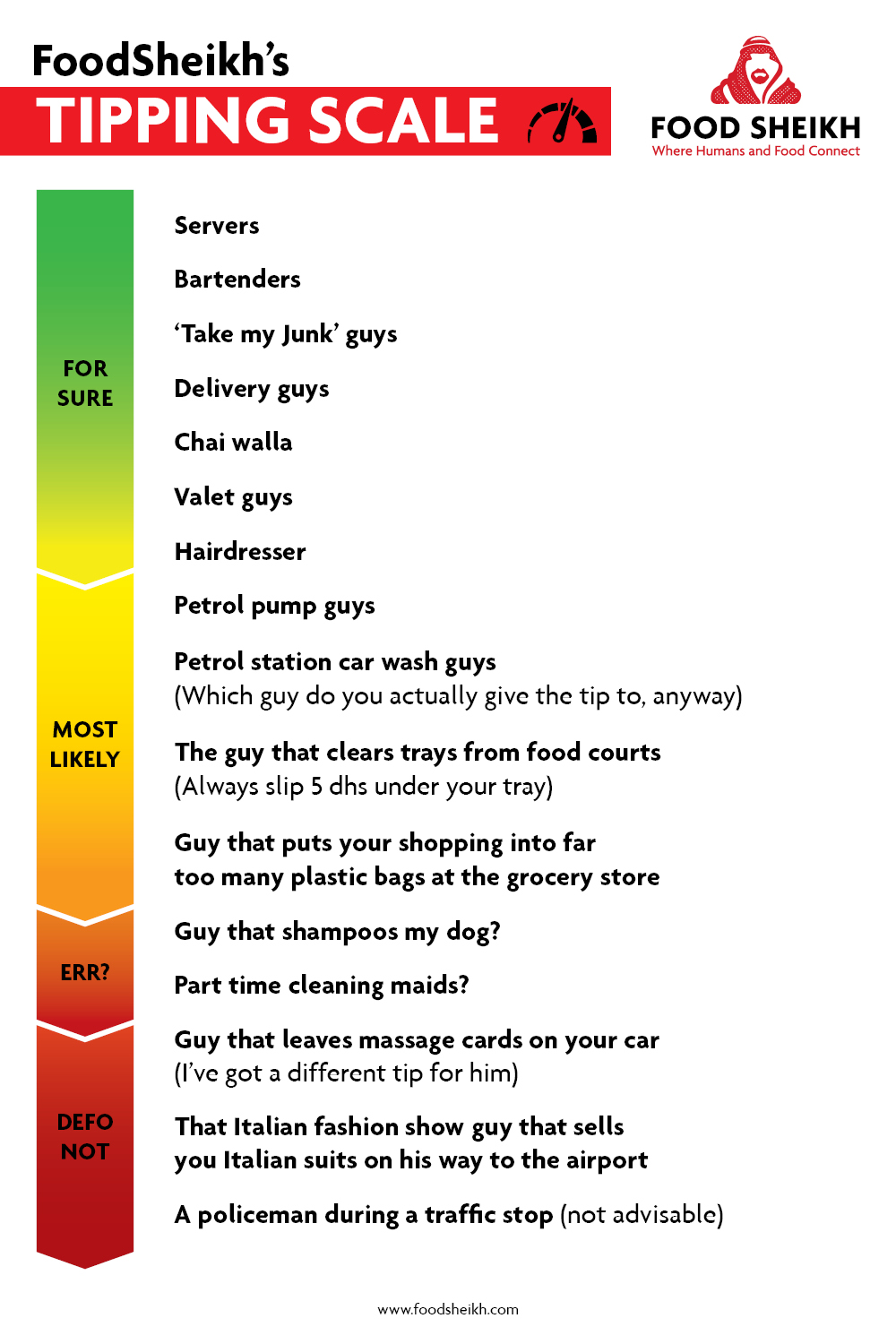 When it comes to the restaurant industry, and the management of the gratuity tips, it is never clear and straightforward, although it should be.  Every restaurant has a different way to manage them.  Point system, pooling, percentage or voluntary, there are several ways, each with their pros and cons and no real industry standard.

What is key to remember is that tips are a financial reward that a customer has chosen to give to an individual for their efforts in looking after them.  It is money that belongs to the restaurant team.  When managers dip their sticky fingers into the pot, it starts to get unsavory.  When the tip money is being used for other things like covering shortages or breakages, it starts to highlight questionable management tactics.

Service staff work hard for their tips, which make up an essential part of their salary.  Most restaurant line staff are not splashing their cash at brunches every weekend or driving fancy cars.  Most of them are sending money home and living pay cheque to pay cheque.

However, I was recently told a story that is all too common in our industry here in Dubai, and it makes me simultaneously sad and angry.

In a single month, this restaurant collects a certain amount of  credit card tips.  As per restaurant policy, these tips are meant to be shared equally among the team members.  Without going into too much detail, the staff are only given 30% of their total tips collected, with the balance being withheld by the restaurant.  Across a year, it equates to almost ½ a million dirhams of staff tips that the owners/management are keeping.

The latest Fair Labour Standards Act in the U.S expressly prohibits employers, managers, or supervisors from collecting or retaining tips made by employees.  Unfortunately, no such law exists here yet, and the added service charge you see at the bottom of the bill does not go to the employee directly.

In an ideal world, our restaurant staff would all get paid enough not to have to rely on the benevolence of others in what is quite a degrading and discriminatory practice, when you think about it.  However, until such a time, it might be worth asking your server what the restaurant’s tipping policy is.

The only moral questions we used to ask of our favourite eatery was about high welfare chicken and organic broccoli.  It’s a sign of our times that more and more now we are finding ourselves questioning the moral integrity of the establishments we choose to support.  In a world that is becoming increasingly divided, restaurants can be and should be a safe haven of inclusion and professional integrity and equality.

If your favourite restaurant is stiffing their employees over a few dirhams worth of tips, what else are they doing – because chances are they haven’t stopped at the tips.