Often, I read up on new restaurants and their press releases, just to understand how they have positioned themselves and what their purpose and objectives are.

The Lighthouse has put serious expectations on themselves.  Named after one of the Seven Wonders of the Ancient World, and inspired by Virginia Woolf, this little restaurant wants to be a reference point for everyday design.   An inspiring daytime venue for the design and creative work set, morphing into an eclectic evening venue with a designer DJ providing tunes for the crowd to enjoy over aperitifs at the mezze bar.

Restaurants are so last year.

At first glance, they seem to take themselves quite seriously.  Even their coffee has made an “organic journey” from Ethiopia, which is just a ridiculous statement that makes no sense whatsoever, but hats off to the PR team for their own creativity!  The Lighthouse doesn’t even call themselves a restaurant – they are a concept store and kitchen.  Restaurants are so last year.

The Lighthouse is located in the uber-cool Dubai Design District, although unlike many lighthouses, this one is not particularly easy to find.  Surprisingly, they are licensed, which means three things – hops, grape and a terrace surrounded by a privacy wall that Donald Trump would be proud of. 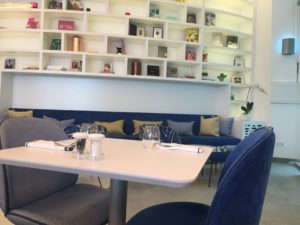 A significant portion of the space is given over to retail, and for a while, I couldn’t figure out what it reminded me of.  Then, I remembered.  So, when Virgin Megastore ran out of musical things to sell, they created a collection of interesting, yet utterly useless gadgets, trinkets, and books – like Crazy Aaron’s Thinking Putty and a self-stirring mug or the coffee table book – Stuck Up!: 100 Objects Inserted and Ingested in Places They Shouldn’t Be.

The Lighthouse’s retail section is like that – except much more expensive and design centric. We spent a good twenty minutes trying to figure out if a stack of tiny cardboard chairs had any further purpose other than to remain inanimate in a pile, like some MOMA exhibition for ants.

The Lighthouse has a residential feel to it, with bookshelves and display cases and the overall space is clinical and clean, allowing their curated collection of Japanese finger bowls and crumpled linen to provide the personality the space needs.  I fear that all the subtle design details of The Lighthouse will be lost on a design Neanderthal like myself, and offer my sincere apologies for my ignorance.  However, I’m not a complete savage – I did notice their rather awesome Gubi designed Beetle chairs – and at around 3,000 AED per piece, they were clearly not afraid to get out the cheque book either.

I explained to my guests that the menu is a Chef Izu menu. After a table of blank faces, I explained that Chef Izu is one of my favourite chefs, and would have made it onto my chef’s feature last week except he doesn’t really cook full time anymore.  I also explained that after gaining a well-deserved following from his time at LPM and La Serre, Izu now moonlights as a chef for hire – a culinary vigilante, creating menus, teaching recipes and generally swanning around in his Peaky Blinders cap. They seemed suitably impressed. I think.

The menu has significant influence from the Mediterranean, with a hint of Levantine with lots of earthy vegetables, full flavoured cheeses, good quality seafood, and meats. Oranges and almonds, pomegranate and cranberries, and pistachios and apricots all play a large part in the menu make up, as does tzatziki, hummus, paprika, and harissa. It is an excellent menu, comprised of sandwiches, mezze, mains, salads, and desserts. It is wholesome and particularly reflective of both the Dubai market and eating trends as a whole.

We ordered the large lighthouse platter of six mezze, green beans with orange, tomato and hazelnuts, a cheese board, seafood risotto and the sliced beef with vegetables and mustard dressing.

The mezze platter came with some thoughtful selections – chicken pieces, kofta balls, garlic and rosemary prawns, some tzatziki with warm, chewy pita bread, and a small bowl of baked feta cheese. All were good, except the chicken was a little gristly and could have done with better butchery skills.

The sliced beef in a mustard dressing was a big portion, even when both myself and the Serb tried to tackle it – and we’ve tackled large portions before.  Served in a skillet, several layers of thinly sliced beef covered oven cooked vegetables. Somewhat disappointing – when beef is sliced so thin, it is so easy to overcook it, and although I didn’t need a massive kick from the mustard, I didn’t even get a twitch from it. 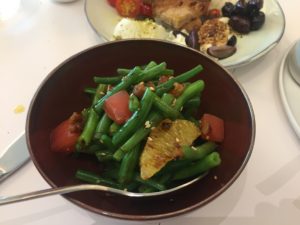 The green beans with orange and tomato were a deep emerald green, crunchy and loaded with flavour. The hummus was some of the best we’ve had this year.

Chef Izu made an appearance, and The Serb acted as if Brad Pitt had just walked in. I’ve never known someone to be so star struck about someone who they didn’t know existed until ten minutes ago. Luckily, being star struck for the Serb means a raised eyebrow and a slightly longer gaze, so it wasn’t obvious.

The seafood risotto was flavoured with pistachio, tomato and freshened up with some basil. The seafood was generous and fresh, the rice was cooked well, and it was relatively light, while maintaining that all important creaminess.

We tried their version of Chef Yotam Ottolenghi’s famous apple and olive oil cake. The secret to this dessert is to let it rest for two days in the fridge. Never eat a freshly made apple and olive oil cake – the flavours need time to mature and intensify. The one we were served had been given that time, and it was delicious. It is also served with a home-made malt ice cream which gave a great balance to the sweetness.

Overall, The Lighthouse does a good job with the food – it is familiar and accessible with some good flavours and ingredients. Chef Izu has created a really solid menu, but more importantly, the team are cooking the dishes well. They should be congratulated. Whether The Lighthouse will become everything they aspire to be, remains to be seen, but the early days indicate they might be on their way. Did I tell you they have Gubi Beetle chairs?