While everyone is focusing on veganism and flexitarian diets, there is something refreshing about a restaurant that celebrates carnivorous sin without apology or reservation.  Blacksmith Smokehouse is such a restaurant.  However, this is not a well-done sirloin with some sweet bottled BBQ sauce slavered over it.  Nor is it charred chicken legs, dry burger patties and exploded sausages with ketchup and sesame seed buns.  No Sir.

Blacksmith is an American Barbeque Smokehouse.  Comparing a British style BBQ to the BBQ’s of the Deep South (Texas, not Brighton) is a bit like comparing a game of village rounders to the baseball World Series.  American BBQ is in a whole different league.   They have national barbeque conventions and workshops, and they hand out titles like Chief Pitmaster and Smokehouse Clerk.

As an example. the Kansas City Barbeque Society (KCBS) is the world’s largest organization of barbeque and grilling enthusiasts, with over 20,000 paid up members.  They sanction over 500 official barbeque events in 46 states.  They also have local, regional and national competitions, and with names like ‘Sherman’s Last Burning,’ ‘Autumn Blaze Smokeoff’ and ‘Hottern’ Hell Cookoff,’ you know these folk aren’t messing around.

Especially when the British equivalents are called ‘Lemington Spa Flavour Fest’ and ‘Grillstock.’  Put away the bunting, Britain, America, for once, has got this. 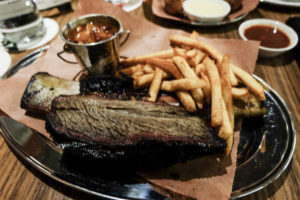 The name Blacksmith is very evocative, creating visions of fire and heat, glistening forearms hammering hot steel and ancient warriors dropping bags of gold on a table in exchange for the finest sword forged from Bavarian steel.

The Blacksmith Smokehouse is in the Wyndham Hotel in SoMa (South Marina) and has secured the services of Pitmaster Orelle Young.  Although most Pitmasters traditionally originate from the south, Young is Manhattan born and raised and worked under Pitmaster Big Lou Elrose at Hill Country BBQ Market in New York City where he mastered the ways of the pit.

Walking into Blacksmith, there is a subtle, sweet, smoky smell, so faint and lingering that it might have been clinging to the apron of chef Young as he walked through the restaurant.  Inside, the décor is bordering on budget, which is sensible in this current market and takes very little away from the experience.  There are large vinyl graphics on the walls, and stacks of wood are used as decorative items.  The ceiling is low, making the room intimate but with nowhere for the sound to travel to, it can get quite noisy in there.  There are high tables close to the bar and dining tables in the main room.  There is a terrace as well, which of course, like all terraces in August remained closed even to the most resilient German tourist. 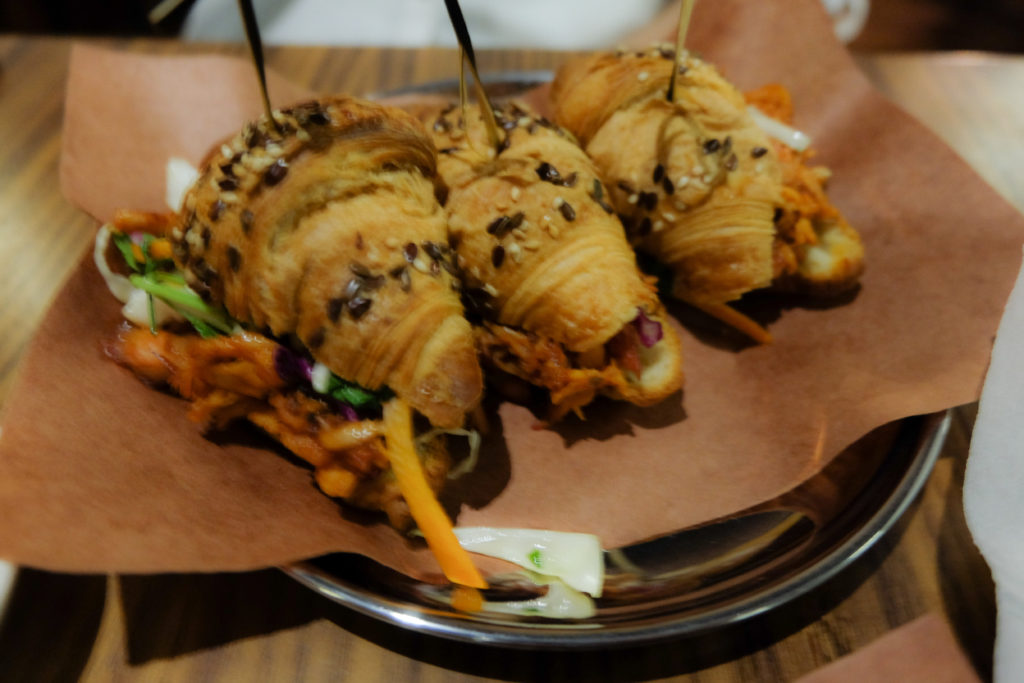 The table is set with the heaviest knife and fork I have ever held.  They are formidable and very fitting for a restaurant named The Blacksmith.  In the unlikely event that anything arrives at your table still alive, you can club it to death.  There is also a black towel napkin. It’s a proper linen towel, the type you would use in the gym to wipe down machines with.  I can only assume this is to towel off after the meat sweats kick in.  Do you even meat sweat, bro?

Typically, BBQ menus are quite limited in nature, but Chef Young has expanded the offerings admirably.  There are starters such as tenders, armadillo eggs, and Texas toast, along with a selection of sides and trimmings such as BBQ beans and lime slaw.  The main courses are nearly all meat – beef, lamb, duck, chicken and fish, hot smoked, cold smoked, dry rubbed and deep fried.

I thought The Serb would be in her element, with a menu that offers a solitary vegetarian mains option.  I thought she would dive into the brisket, or the ribeye or the short rib with aplomb.  She ordered the chicken sliders.  You think you know someone. 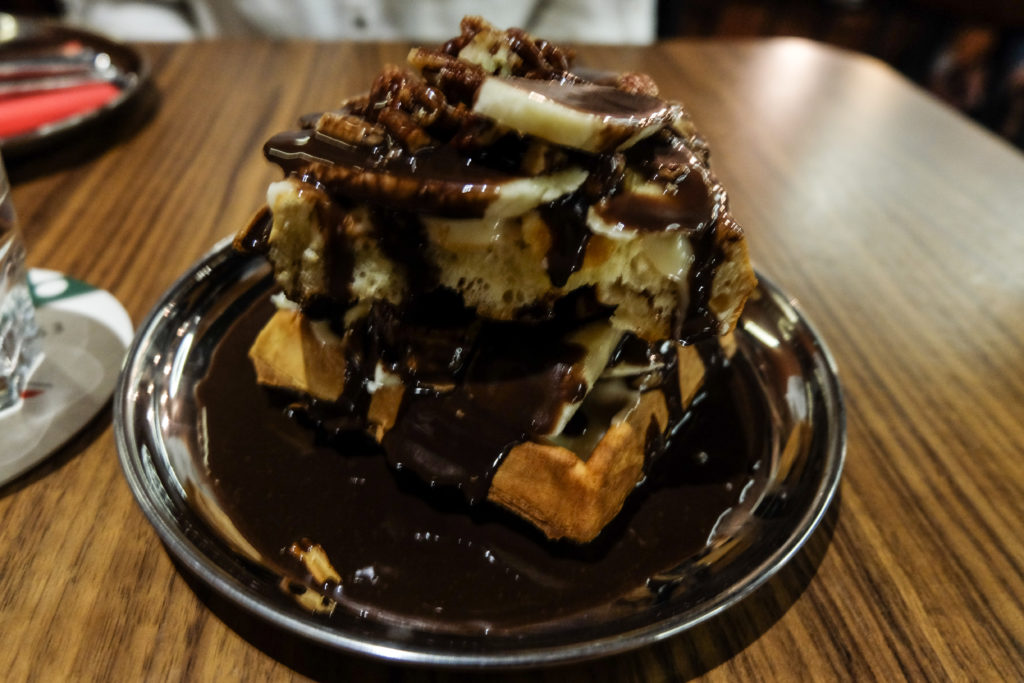 I was tempted to walk into the kitchen and drop a bag of gold on the counter and demand the Pitmaster’s finest cut, forged from the hottest coals.  Instead, I ordered the Short Rib from the server.  We also ordered the corn pudding – a southern living, comfort food staple, and the hush puppies –  deep-fried cornbread balls with a dipping sauce.

The service was just about on point, but our server was getting stretched as more tables came in for dinner.  He was probably exhausted from carrying all the cutlery during set up.  However, he just about held on and still managed to hustle with a smile on his face.

The Short Rib, smoked for 14 hours with just a salt and pepper rub, was crusted black, intensely smoky, rich and crisp, juicy and not too lean.  You could eat it with just a fork.  Chef Young knows how to smoke them, and he indeed proved his Pitmaster credentials with this dish.

The chicken sliders came in mini croissants that looked like they were left over from the breakfast buffet.  It was an odd choice of vehicle for the excellent tasting chicken inside.  Not sure if they are trying to be inventive, or cost-cutting, either way, it didn’t work for me.  Perhaps a moist biscuit or cornbread muffin would have been better than the mini croissants.

The deep-fried cornbread balls were fluffy, textured and had that wonderful grittiness that you want in your balls.   Dipped in their mac and dream sauce, a layered, heavily flavoured cheese sauce, they were little mouthfuls of southern delight.

Their corn pudding is a decadent, heavy pudding, and like its Southern counterpart, the sweet potato casserole, it was almost sweet enough to be a dessert.

For the actual dessert, we tried the Grand Choco Waffo experience, which is meant to encapsulate all their desserts in one heart attack-inducing dish.  It was decadent and over the top, chaotic with flavour and saturated with sugar.  A one-time try for me.  Next time, I want Pooky’s Peach Cobbler.

The Blacksmith Smokehouse is an excellent introduction to American BBQ, and it would be good to see the highly skilled Pitmaster Young start experimenting with different cuts and techniques, flavours, and rubs.  He could then launch Dubai’s inaugural “Desert Dog ‘Hotter than Hellfire’ Bake-off.”

Until he does, get down to Blacksmith and get your meat sweat on.

PSA:- Their tagline is “Put some south in your mouth.”  I would agree with this, but make sure you get consent first. 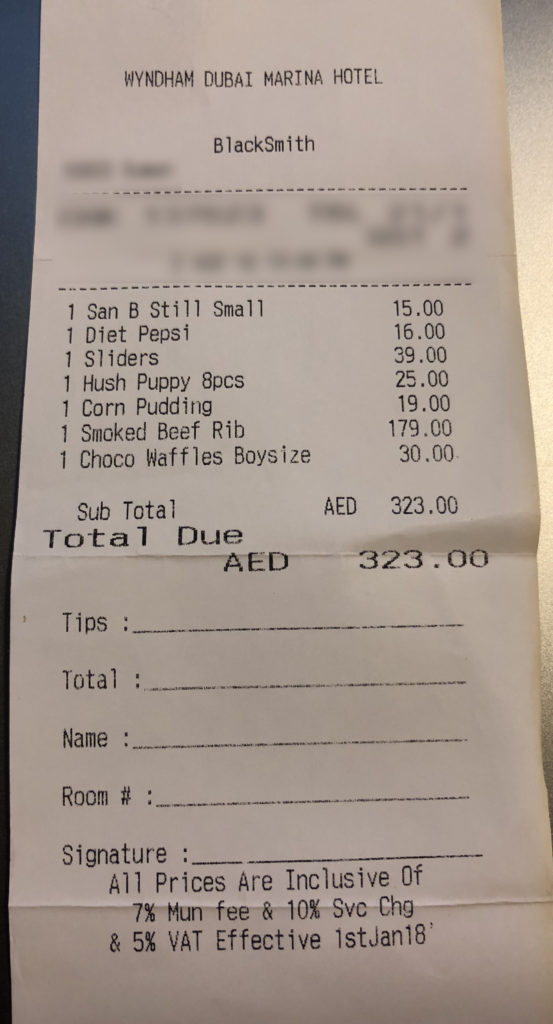