Jumeirah Village Circle is the least accurate development name in Dubai.  It is not in Jumeirah, it is not a village, and it is certainly not a circle.  In fact, for those familiar with the area, it is loving referred to as the Millennium Falcon from Stars Wars, thanks to its unique shape.  However, because of the relentless construction in that area, it’s the dusty, broken Falcon of Jakku, not polished, sleek Falcon that Lando Calrissian used to fly. 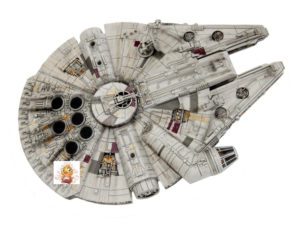 Government propaganda, that’s why.  I’m not kidding.  Using a tactic called gastrodiplomacy, the Thai Government has intentionally bolstered the presence of Thai cuisine outside of Thailand to increase its export and tourism revenues as well as its prominence on the cultural and diplomatic stages.  The Thai government back in the ’90s ran a top-level program that trained Thai’s to become chefs and sent them out into the world, to open “family run” Thai restaurants with names like Elephant Jump, Cool Basil or Golden Leaf.  I can’t talk too much about this but google Global Thai Restaurant Company, Ltd, and you’ll see what I mean.  Just use an anonymous internet café, go incognito, don’t stay longer than 5 minutes and head straight to the airport afterward.  I’ve said too much already. 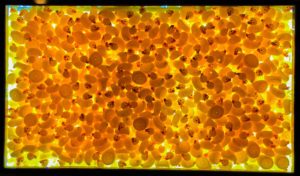 Sticky Rice has found a home in Sobha Daffodil building in JVC, next to a restaurant called Dessert Corner, a name that is as misleading as JVC itself. (they don’t sell a single dessert item) The area is dusty, noisy, disorganized.  The entrance is a small corridor that has a 2-meter drop to a sandy wasteland that doubles as a temporary car park.  It is an odd location, but you sometimes have to go off the beaten track to find the best places.

For the first time in a very long time, my dining partner was not the Serb.  I woke up to an empty house and a note on the fridge saying, “this isn’t working,” which was weird as the fridge was working just fine.  Just kidding – she had yoga.  I invited a friend who I’ve known for around 10 years but only see twice a year.  He is the most charismatic, antisocial person I know, and the only reason he joined me was because he lived next door to the restaurant and was hungry.  Pure cold convenience, nothing else.

10 bright yellow chairs, three tables, and a small counter make up Sticky Rice.  It’s the future of sustainable dining.  Smaller dining space, robust delivery menu.  You might not agree, but it’s the truth.  No need for 400 seats over three floors of restaurant space, for example. 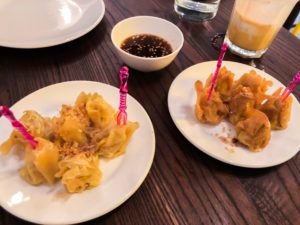 We walked in, and were immediately greeted by Mo, who I am guessing is the son and social media king of the operation.  He was busy photographing a new lactose-free ice cream drink, probably to include in his weekly report back to his handlers in Bangkok.  His enthusiasm and energy were infectious.  When a brand has good energy, it will always come from someone.  I think we found one of the energy sources.

Sticky Rice is apparently a family run operation – quite literally.  Their entire kitchen team is from Thailand, with Mama Amena at the helm of the kitchen.  She is supported by Maha, Maryam, Aunties Tae, Yaa and Pot, Uncle Jo, and finally Mo.  Well, that’s what they claim their names are, anyway.

My reluctant dining partner had already checked the menu online, so he knew what he wanted.  He clearly didn’t want to waste any unnecessary time looking through the menu. Pure, cold efficiency, nothing else. 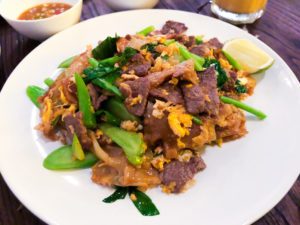 We ordered the Kanon Cheep, their popular Thai chicken dumplings, to share.  We went with their suggestion of half fried, half steamed.  We followed it up with Khoa Mun Kai, Hainanese Style fried chicken and Pad See Ew, thick flat noodles, stir-fried with beef and Chinese broccoli.

Looking around the room didn’t take long.  Did I mention it’s a small space?  They have a fun lightbox stuffed with hundreds of yellow rubber ducks; apparently Mama’s favourite thing in the whole world, a few posters, some pendant lights and that’s about it.

They also didn’t put an access hatch in their bar counter, so every time they need to serve a table, they have to go through the kitchen, outside onto the street and walk back in the main door.  Charming in January, annoying in August.

The half fried, half steamed suggestion of the chicken dumplings turned out to be two full orders, which I suppose is one way of upselling.  However, they were so good, we didn’t mind.  I hate to say it, but the fried ones were better than the steamed.  Tightly stuffed and generously filled, these dumplings were little mouthfuls of flavour and escapism. 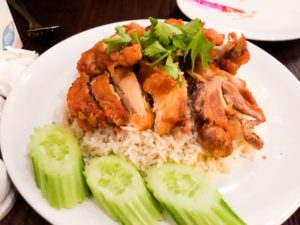 The mains arrived, and the Khoa  Mun Kai is the dish Mama has been making since she was recruited 9 years old.  It’s a simple, but brilliant dish.  Pure comfort food.  Fried chicken and rice.  The dish is actually a complete meal.   Several slices of golden fried chicken over piping hot, silky garlic rice; a bowl of clear chicken broth to sip between bites, and chunks of cucumber to clean the mouth from time to time.  It was heart-warming and delicious.

Pad See Ew is thick flat noodles, stir-fried with beef and Chinese broccoli.  The flat noodles are supple rice noodles, so slippery it’s as if they are alive in your mouth.  They are cooked in a soy sauce, and served with beef and broccoli, bringing a mouth-watering balance of sweet and umami together in one dish.

Sticky Rice is one of those rare restaurants that has more guts than glamour and more soul than finesse.  They are quirky, honest and hard working.  The food is outstanding.  We eventually left because people were waiting for our table.  Plus, my friend needed to get home, he had been out far too long.   As we walked out, more and more people were arriving, motorbikes, G-wagons, and Jeeps all mounting curbs looking for parking.  Sticky Rice may have only been activated open a few months, but they are making all the right moves.  The Global Thai Restaurant Company, Ltd must be very proud.