In the Willy Wonka world of La Mer, with its bucket showers, pavement paintings and Insta-perfect landscaping, a selection of restaurants vie for the crowds’ attention and custom.  However, it’s a vicious dog eat dog world out there on the brutal, unforgiving boardwalk of La Mer.

Cartoon eyes hang from trees, wet floor signs are in the shape of bananas, dramatic angel wings are painted on walls, large cartoon octopus and sharks pose for photographs, and hundreds of multicoloured slinkies hang from ceilings.  It is an experiential overload and restaurants are stuck in the middle of it like a puppet ventriloquist suddenly finding themselves competing in the middle of a Cirque du Soleil performance. 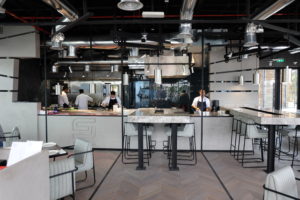 Instagrammers beware – it seems like Slab didn’t get the memo.  The restaurant is understated and subtle and with monotone greys, concrete and architectural lines, it is urban, uncluttered and clean.  Slab is a respite for the eyes and a well-needed rest from the visual assault of La Mer’s “sense of place.”

There is also a terrace that overlooks a small little pond.  The pond was, of course, filled with hundreds of floating yellow plastic ducks, much to the dismay of the restaurant, I’m sure.

In the absence of anything Instagram-able, I’m pretty sure I saw a table of Instagrammers sitting in total silence, phones out but motionless, like zombies waiting for some kind of peripheral movement to activate them.

We sat inside, and a friendly waiter arrived with the menus.  He introduced himself and offered some recommendations on what we should order.  He was chatty and seemed honest and genuine.  He even managed to mention that his father had called him that morning from Serbia.  It seemed relevant at the time. 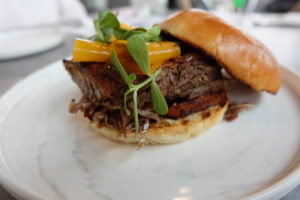 Slab serves classy tartines and main courses.  Tartines are basically just half a sandwich, but because they are French, they get away with it.  The menu is clever, taking the tartine fillings and turning them into more substantial main course offerings.  This allows a fuller menu in a smaller kitchen.   The flavours are globally inspired – there were influences coming in from the Middle East, Europe, and the Far East – however, it is a menu that doesn’t overstretch or overcomplicate itself.  It is clean, unfussy food.

Because our waiter was from Serbia, The Serb attempted to place her order in a deep southern American twang in case he noticed her accent.  It was a good move, but I’m not sure why she put on her sunglasses as well though.  As you might have learned by now, it’s best not to ask. 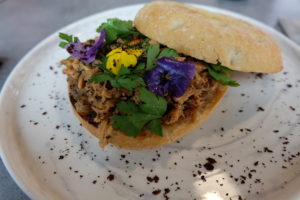 We ordered the West Bank Chicken Tartine, a Fragrant Chicken Salad, the Duck Confit Brioche, and the Organic Salmon Sandwich with avocado puree.  We also had some cassava crisps and sweet potato fries.

The music in Slab was a little too loud for the number of people in the restaurant. However, the playlist was pretty good, with eclectic songs from NAS to The Cat Empire.

While we waited for our mains, I’m pretty sure I saw our waiter trying to sink a few yellow ducks out by the pond, but I could have been mistaken.  Eventually, our food was ready and arrived at the table in very attractive plates and bowls. 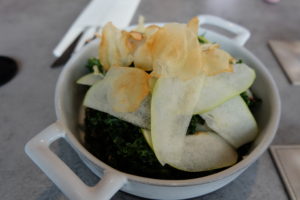 The West Bank Chicken Tartine came alive with the sumac and pine nuts, but the caramelized onions brought a little too much sweetness for me.  The bread was soft and had a great char to it, enhancing flavor and texture.

The fragrant chicken salad was a little misleading – the promised mixed greens turned out to be just chopped kale – however, this actually gave it much more body and substance.  The dressing was bright and lively and balanced out the kale’s bitterness.  The pears and walnuts brought in a breezy summer feel.

For me, the Duck Confit Brioche was the winner.  The umami of the duck contrasted wonderfully against the sweetness of the brioche, and the plum puree was subtle and didn’t overpower the sandwich.  The duck meat was generous and cooked beautifully. 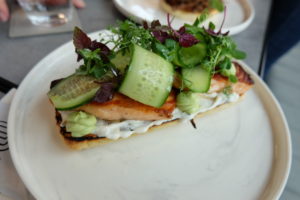 The salmon was a little overcooked for me, but I like my salmon almost translucent, and the rest of the table ignored my comment.  It came with an avocado puree and long strands of pickled cucumber.  A solid, well-constructed dish, although quite safe and simple.

Overall, the presentation of the food was excellent, it must be said.  You know the plating is going to be good when the Chef has flowers and tweezers on the kitchen counter.

Our waiter returned to ask us if we wanted some desserts.  We did, and we ordered the cheesecake and the chocolate bar, which prompted a story from our waiter on how his grandmother makes the best brownies in the world.  It was refreshing and enjoyable to be included in such enthusiasm, and we might visit her on our next trip to Serbia. 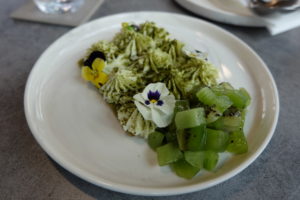 The chocolate bar was far too stodgy and rich; it is a heavy, decadent dish that takes commitment and work to get through it.  Maybe our waiter’s grandmother could hand over her recipe.  The cheesecake, however, was blinding – the semolina and pistachio crust was moist and chewy, and the yogurt cheesecake was light, fragrant and moreish.  A real surprise dish for me and one I would return for.

When is a sandwich not a sandwich? When it’s a tartine from Slab.  The combination of consultant Chef Thomas Reger’s creativity and Chef Omar’s mastery of flavours means Slab serves up some pretty tasty food.  It is an interesting addition to La Mer, and part of me thinks it might do better with a more elevated menu and a wine list.  But that is totally a compliment to how seriously Slab takes their sandwiches. 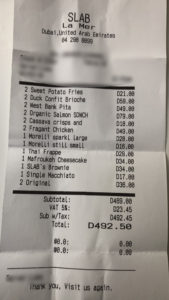