The Surf House is in Jumeirah, but should not be confused with the Surf Cafe.  The Surf House is in an old school white villa set a few feet back from the road.  Find the closest available parking, somewhere like Satwa probably, and walk the rest of the way.

The villa’s courtyard is a working space, with some makeshift tables from upturned cable wheels, a place to wash your boards and sandy feet, a well-used barbecue, with bicycles up against one wall and a variety of boards propped against the other.

The Surf House, superficially, is just a surf shop with a café at the back. However, scratch the surface, and it’s so much more than that.  I hope through the medium of food reviewing, you get a glimpse of what that is.

Single Fin Café can be found at the back of the villa, past the Roxy board shorts and the Oakley sunglasses.  There is a wooden herringbone clad bar counter occupied by people with tanned legs, tattoos, and flip flops. In the far corner, there is a stack of different surfboards, and the ceiling is shiny corrugated iron with backlighting. The walls are covered with artist’s drawings of waves and surf, the tables are simple natural wood and there is an acoustic guitar propped up in the corner.  Of course there’s a guitar.  It is unfussy and clean, with a certain charm and welcoming personality. I did miss some music though – maybe some Jack Johnson or Sublime would have really set the scene.

My experience with the surfer community is limited to a few holidays at Fistral Beach in Newquay and watching Bruce Brown’s The Endless Summer. I watched it twice actually, so I pretty much consider myself an expert.

I like the name, Single Fin Cafe.  It references the single fin surfboard from back in the day. According to a friend of mine, the feel of a single fin ride is like nothing else you’ll experience out on the water.  It can be difficult to make your own speed on the swell, he told me, but it teaches you to take whatever the waves give you. You learn to look further down the line and milk the wave until it gives up.  It rewards as much as it punishes and some of the sport’s most breath-taking rides have happened on a single fin board.  It’s a great name for a café.

The menu is split into breakfast, salads, tacos, burgers and sides. They have poke boats and some ice cream and desserts. It is a fun café menu that has something for everyone. The claim of authentic surf cuisine is a bit of a stretch, but who’s really paying attention to that sort of stuff.  If restaurants can get away with grass fed, single-udder butter, then Single Fin can get away with surf cuisine.

They have an impressive beverage menu, which makes sense when you remember that they are a functioning surf shop and school meters from the beach.

What is very clear is Single Fin’s commitment to supporting local companies like themselves – their coffee is from local boutique roasters, Nightjar Coffee, they have partnered with Ripe for their ingredients, Wild and Moon supply their cold press juices and Limeline Beverages supply them with the awesome Fentiman’s range of drinks. 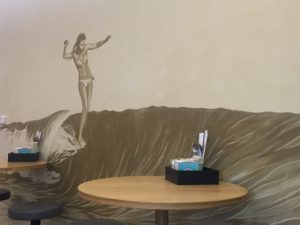 As we sit down and get the lay of the land, I start to understand that this perhaps is not really about the food, but more about the larger community and knowing the importance of an egalitarian society – a free community sharing a common spirit and identity.

Our server came over and took our order. She was friendly and efficient but wasn’t wearing a wetsuit which was a bit of a disappointment. We ordered a pear and peach iced tea, ginger refresher and a macchiato for our drinks. For food, we went with the seared tuna salad, the quinoa and mango salad, the fried fish taco and the cheeseburger.

It may seem like a lot of food, but you certainly burn up the calories when you’ve been out on the waves all day. Truthfully, we had spent a rather relaxed morning in the mall, but it’s virtually the same thing.

The fish taco wasn’t good if I am honest. The fish was over-fried and very dry, and there was no generosity in the guacamole, salsa or sour cream portions. There was also a heavy hand when throwing in the shredded cabbage, which unfortunately just added to the dryness. However, the taco shells were warm and fresh, if that’s any consolation.

The burger was as good as any I’ve had in Dubai. The grass-fed meat was juicy, cooked to temperature and with excellent seasoning. The cheese melted until it just turned gooey and the bread was freshly baked and soft. The fries were thick cut and cooked in clean, hot oil. They were soft with a crisp bite to them.

We watched The Surf House in action as we enjoyed our food – the comings and goings of an entire community. There was the same relaxed, holiday vibe as a backpacker’s lodge in Australia would have.  Scott Chambers is the man behind the Surf House.  He is the Dominic Toretto of the surfing world. I have visions of him hosting barbecues in the courtyard out front, serving food on broken pieces of a surfboard, raising wax sticks saying, “Salute, mi familia. Dude.” He started The Surf House back in 2005 and over the last decade has created a tightly knit community of like-minded individuals that all share the same spirit and enjoy the positive vibes of life.

Our salads arrived in disposable bamboo boats and were fresh, cold and delicious. The tuna was a decent size but could have been seared a little longer or applied to a more intense heat to get that seared char. The greens were crispy, the avocado was ripe and soft, and the dressing was light and tangy.

The mango and quinoa salad was sweet, sharp and refreshing and reminded you of what a summer holiday should be like. It also came with cubes of soft avocado, bright red cherry tomatoes, and crunchy baby sweetcorn.

The Surf House isn’t about the food or the surf. It’s about much more than that. It is a place to kick off your flip flops off (as The Serb did) and take a break from life.  It doesn’t matter if you don’t have sun bleached blond hair, a beautiful deep tan and a body sculpted by the waves.  (The Serb agreed with me on that one – reluctantly.)  It doesn’t matter if you don’t know your Benny’s from your Boogers or you think a Chinese Wax Job is something you can only get in a Bur Dubai hotel. There is a feeling of acceptance at The Surf House and spending a few hours there can be a therapeutic escape from the Dubai rat race. 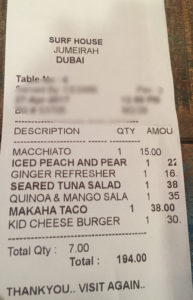