As is typical for many young recently graduated kids, Saud Al Matrooshi had no idea what he wanted to do.  However, food always cropped up, again and again, like some career guidance counsellor, giving a nudge here, a poke there, guiding him to a seemingly predetermined path. A path of food and kitchens and creativity and discipline.

It’s a familiar story, his love for food can be traced back to his childhood, where his dad was always in the kitchen cooking meals for the family to enjoy. His father was a family man and knew one of the best ways to bring his family together was over good food.  The kitchen was a center of the Al Matrooshi home and Saud was to learn that food was to keep coming back into his life, like a calling.

For a while, Saud wanted to be a pilot – a glamourous job, lots of travel, get to fly a plane, the perfect job for him.  But while at the aviation college for the entrance exam, he wandered over to the Century Village across the road and watched as people were enjoying their day eating, laughing and connecting.  Again, he felt the pull of the food industry.

He discussed this desire with his father, who was not entirely supportive.  You need to get a proper job, was the reply.  A proper job.  None of your cousins or family are chefs, this is not a proper job.  You cook at home, for your friends for your family, but not as a job.  A chef is a simple job. Too simple.

So, Saud went on to graduate in Communication Technology, but the allure and appeal of a chef still called his name.  A bit like The Force calling Luke Skywalker. The more he researched the role of a chef, the more he learned that a chef was an important job, highly revered in the West. It was not a simple job, his father’s words ringing in his ears. Despite working fulltime, making documentaries in the Seychelles, for the Seychelles Tourism Board, he still wanted to get into the kitchen.  It was like an itch he needed to scratch.

Even during his years in the Military, which he describes as some of the best times of his life, he laughs at how bad the food was. “It wasn’t meant to be good, this is the army,” he explains, with a smile on his face.  However, he couldn’t help himself and made some basic but impactful changes to the catering.  They eventually put him in charge of the catering, and he became known as the food guy throughout his division. 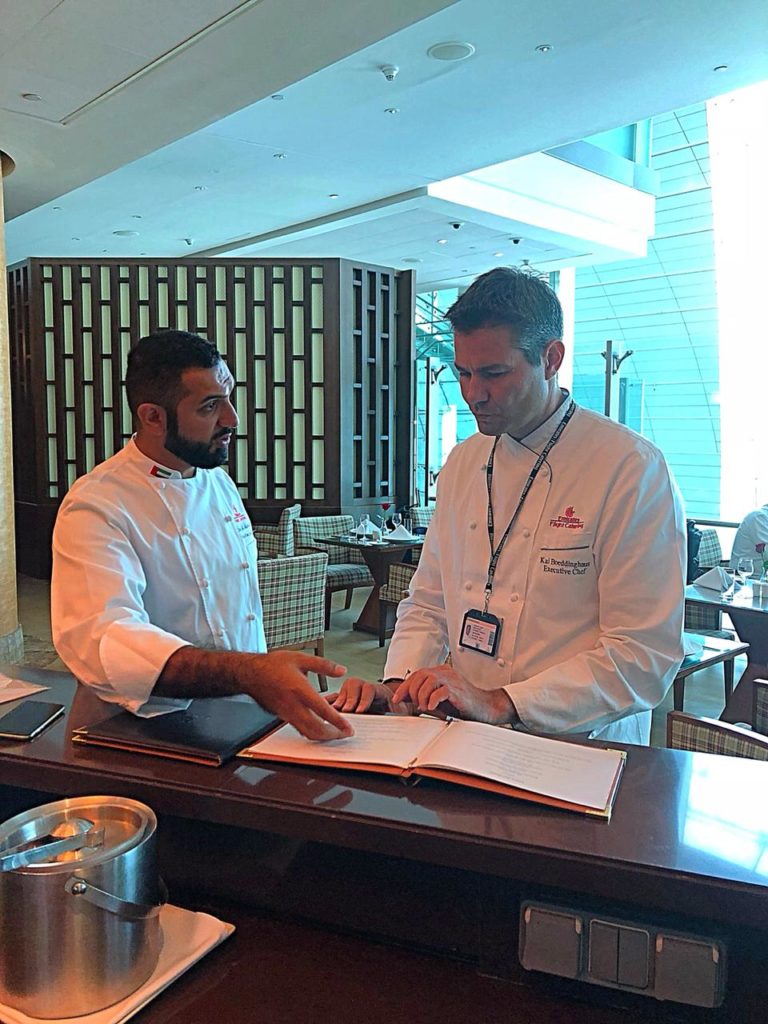 He was finally given an opportunity to get into a professional kitchen, but it was clear he wasn’t going to get any free rides.  He spent four months as a training commis in the Grand Hyatt, peeling potatoes, boiling water, mopping walk-ins.  I asked him if he was happy doing the grunt work.
“Yes, I was more than happy. I was finally learning,” he said.

I asked him where his initial motivation came from to embark on this four-month training.  He explained that every time he cooked for someone, he was told how good his food was. “If it’s good, it can be better, and for it to be better, I need to learn,” he says. “I love being in the kitchen, I love the smell, the heat, everything about it.”

After his four months of training, and even more enthused, Saud moved to the Dubai Creek Golf & Yacht Club, where Chef Max, his first professional mentor, put him on another training programme.  This time it was for four years. Working in stewarding, butchery, storekeeper, inventory, service, you name it, Saud did it.  It gave him a holistic and detailed overview of an entire operation.

The journey Saud took meant he had to break down a few barriers, but he was ready for it. There is a quiet determination about him. He is a man with resolve and purpose.

One example, during his time in restaurant service, he once served the table of one of his relatives, who was a senior government official.  Shocked at seeing Saud bringing over his soup, he took him to one side and asked if anything was wrong.  He asked if he needed any financial assistance, offering him a proper job.  A proper job.

After four years, he became the Assistant Executive Chef.

He found comfort in food.  He found himself in food.  Not just eating food, not just cooking food, but all aspects of it, from inventory to stock taking to ordering.  At school, Saud failed maths miserably, again and again.  He was useless at numbers and calculations, but he became a procurement manager for Al Futtaim restaurant division because, with food, numbers started to make sense.  His currency is kilos and litres, pallets and packets.

During our conversation, Saud casually drops in further evidence of his drive, determination, and love of F&B. “I once owned an American diner in Garhoud,” he casually remarks between sips of espresso, “It’s closed now.” His hand gestures implied it was a long time ago.  He also is the co-owner of Food Box, a sushi place in Ajman, where he made his ROI in just twelve months.  He also has an active Snapchat account with thousands of avid followers who watch as he cooks family dishes and visits restaurants on a regular basis.  Because of this, he gets invited to international cooking competitions and funnily enough, Emirates Flight Catering job interviews.

Saud Al Matrooshi is the first Emirati chef to work for Emirates Flight Catering, and he’s been given a big job.

What is immediately clear is that this isn’t a token role handed out because he has a blue passport with a Golden Falcon on the front.  He wasn’t hired because they thought he would be a good poster boy, although, by chance he certainly is.  Saud recalls having to cook dishes for a panel of EKFC experts as part of the interview. “I think they were all surprised at how well I spoke about food, they wanted to check if I could actually cook it,” he explains.

He served them some of his signature dishes and distinctly remembers what was on his menu.  He served a zesty salmon tartare with chive infused cream, date syrup glazed short rib machboos and a peach and cream tart.

After the tasting, he was told to go home.  Confused and curious about their feedback, he asked the Chef what they thought of his cooking. “Look,” the chef told him, pointing at the table, “your plates are all empty. I think this is a good thing.”

Soon after that Saud was offered a chef role at EKFC.

It’s a title he’s earnest about. “People are abusing the title,” he explains to me. “If you are not a chef, don’t call yourself a chef. If you don’t have the credentials or the professional experience, you’re not a chef.  If you turn up at a restaurant pretending to be a chef, without the proper food safety training, you could end up poisoning people.  It’s like me going onto social media, calling myself a doctor and then giving out advice.  It’s almost criminal.”  It’s evident Saud’s protectionist mentality is born from years of hard work, failure, struggle, learnings, and graft.  It is inspiring to see such passion.  A chef is a title Saud has worked very hard to achieve, and it’s a title he’s learnt to respect.

Saud has been representing his country for years, through the military, international cooking competitions, making documentaries, but nothing quite as emotive and popular as representing Emiratis, and their food on their national airline carrier.  His social media feeds are full of requests for more Emirati cuisine on the EK flights. It’s a different kind of pressure, but one Saud is ready for. “I want to make my countrymen and women proud, but I also want to make sure we’re representing the hundreds of other nationalities that fly Emirates every day.”

For an average person, the interview would end there. A new job, head down and crack on. But Saud is far from average, and he is always moving forward and pushing boundaries. He explained what else he wants to do.

Saud is ambitious, confident and hungry to learn. He is passionate about what he does and wants to show others the possibilities that the kitchen can offer them.

“If you do what you love, you will wake up every day, feeling fresh, ready and you’re always going to have fun.  Your job, if you are passionate about it, will become like your favourite game.”

Saud Al Matrooshi is Executive Sous Chef at Emirates Flight Catering, and he wants you to know that it’s a proper job.