On the 72nd floor, just a short elevator ride away from the many awards of Weslodge lives Morah, the latest restaurant from the same group.  There are two other international locations of Morah – one in Miami and the other in Toronto.

Across the pond, they are known as Byblos restaurant, but changed their name to Morah in Dubai, because there are about one billion Byblos named businesses already registered here.

Just an FYI – JW Marriott has a lot of elevators.  A lot.  Just be careful, I’ve heard of people missing their reservations because they underestimated the complexity of the JW Marriott elevators.

Our table was in the corner of the room, a banquet bench up against the window.  The banquet was seemingly made up entirely of cushions, of which our hostess had to remove 15 of them so I could sit down.  She whisked them off to the cushion cupboard somewhere.

Morah claims they are inspired by the flavours of the eastern and coastal Mediterranean.  However, if Chef Stuart was completely honest with himself, he would probably agree on being Levantine or Middle Eastern.

The menu is populated with caraway and saffron, halloumi and figs.  There is Dukkah and olive oil, pomegranate, tahini, za’atar, and lentils.  There is a heavy Levantine influence on this menu, and the Mediterranean label is a little misleading.

In Miami, I get that the whole eastern Med tagline works.  Menus of Middle Eastern cuisine probably stir up equal measures of confusion and wide-eyed panic.  The shawarma is possibly the only Middle Eastern dish that’s known, and that’s only because Tony Stark ate one at the end of the Avengers movie.

But over here, in the land of Shawarmas, we know a Middle Eastern inspired menu when we see one.  So, Morah, let’s call a shawarma a shawarma, shall we?

Our waiter was super helpful, attentive and on the ball.  However, he struggled a little with some of the ingredient questions.  When asked what was in the homemade Turkish paste, he replied, “Turkish, tomato and paste.” I suppose he’s not wrong but I don’t think he’s fully right either.

He also guided us to a hugely inappropriate amount of food after explaining how much he could eat off the menu just by himself.  Little did we realize he must have the appetite of a fully-grown bull elephant and the metabolism of a cheetah.

When Navigate Design came up with the wonderfully eclectic Weslodge design, they created an astonishing blend of Rock and Roll meets Ralph Lauren. Couple that with the food and service, and the awards came flying in – and deservedly so.

With Morah, they haven’t quite been as successful. On paper, Morah should be a very good looking restaurant – Miami chic with a touch of Palm Springs, some Cuban vibes and a hint of 1920’s art deco. However, in person, the space falls a little flat – the colours don’t pop, and I’ve been informed the restaurant works better in daylight.

Morah lives at the very top of the JW Marriott hotel. Directly above you is the moon.  It is spread over two floors, with a grand circular staircase feature in the middle of the room with a large chandelier linking the two floors.  The room was dark – too dark, and our waiter had to stand next to us, like a watchman with a lantern so we could see the menu.  Add all the cushions around me and I felt like a Lord in Middle England, reading a missive from the King by candle light in the great hall. I felt like bellowing, “Take this food order to your master, and be fleet of foot, my good man!”

I didn’t say that, obviously.

After much deliberation, we eventually ordered roasted red beets and the duck kibbeh to start. We also went with a creamed spinach pide and followed up with some 48 hour short ribs and the black cod.  Just in case that wasn’t enough, we also ordered the roasted Brussel sprouts and the fried rice.

Had the baby beets been any younger, they would have been mistaken for cranberries at the local market.  Having said that, they were finely textured, tender and partnered very well with the pistachio and caraway labneh.

The duck kibbeh with dried fig, date molasses and tahini sounded better on the menu than it tasted in the mouth.  Unfortunately, the flavour of the duck was lost over the heady spices of the kibbeh mix. There is nothing sadder than a lost duck.

The pide was long and slender, with a good balance of spinach, garlic sauce, and a fragrant dukkah spice mix.  It was cooked well, but the two cheese pide at Ruya still wins it for me.

The black cod arrived in five little parcels wrapped in vine leaves.  I wasn’t sure if I should unwrap them or eat them as presented. I tried both methods. Unwrapping them was like opening a very anticlimactic Christmas present, and leaving them wrapped meant far too much leaf.  Grief or Leaf – those were the choices.  The fish itself was well cooked and flaked off in large succulent pieces, but the overall effect of the dish was lost on me.

In contrast, the short ribs were great– sweet and sticky from the carob molasses, and tender umami flesh almost dissolved in your mouth, leaving the crunchiness of the onion bhaji topping.

What were also great were the Brussel sprouts. Surprisingly great, actually. Crunchy, flavourful and with an amazing char. They were served with little cubes of halloumi and some tahini yogurt that provided a delicious saltiness to the vegetable. Remember kids, at Morah, Brussel sprouts are not just for Christmas.

As I looked around the room, I spotted a famous Dubai food critic in the far corner. She didn’t notice me, luckily, as I was wearing my usual trench coat, sunglasses, and fake mustache.

The Serb did her usual trick of leaving most of her mains, claiming she was full, then ordering dessert.  She went with the homemade Nutella ice cream, which was excellent and the white chocolate and pistachio ice cream which was not.

Overall, I think Morah does a pretty decent job. I think they do need to own their obvious Levantine menu leanings and get their positioning right, and they will always have to fight to be heard above the noise of Weslodge, but overall they have a slick product.

The music was good, service was on point, and the food generally was strong, but for me, if Weslodge was M. Night Shyamalan’s The 6th Sense, then Morah is his The Village.  Still very good, but not as good as the first one.

Just a final note.  JW Marriott is the only hotel where eating a three-course meal is quicker than waiting to collect your car.  Next time I go, I will give them my valet ticket, go have dinner and then be back in time for the car to arrive. #firstworldproblems 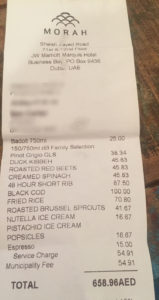