Zabeel House Hotel is located in the Onyx Tower, in the Greens.  It’s the kind of uber-cool, chillaxed hotel where you don’t know if that’s the doorman running to open the door for you, or a guest late for a meeting.

We walked into the lobby, and I looked for some signage for Lah Lah.  The Serb immediately approached someone to ask for directions, which is very pragmatic and a last resort in my book.  However, it’s quite useful.  Lah Lah is on the fourth floor.

As we walked to the elevators, the Serb looked back and said, “I hope that lady works here.”

Lah Lah is up on the 4th floor, round a tight little bend to your left.  The terrace was closed because it’s an inferno outside.  The bare, warped, dusty furniture we could see through the window was living proof of the harsh realities outdoor furniture face every summer.

There was no-one at the entrance, so we wandered in, hand in hand, on the hunt for someone who could help us.   We got as far as the walk-in freezer in the kitchen before we found someone.

No, that’s a big fat lie, but we did almost make it out the other side of the restaurant before we met someone who showed us to an empty table.  We assumed he worked there. 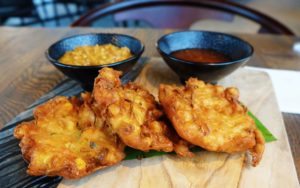 The service was functional, but little else and certainly not reflective of the self-proclaimed “community hotel” label they’ve given themselves.  Restaurants miss a trick when they don’t make an effort to connect with their guests, and in this market, it’s almost suicidal.

I learnt more from their Instagram and website than I did from actually visiting them.  I couldn’t tell you what Lah Lah meant, because no-one bothered to explain it to us.  Maybe they don’t know.

Also, they grow organic vegetables, and we could pick our herbs from their “living” dining table to flavour our food.   I got that exciting titbit from Google, which was not the name of our waiter.

I flagged our waiter down to order some drinks.   He stared at us, nodded once, and wandered off.  Maybe he wasn’t a waiter, but a guest on the way to the bathrooms.  You can never tell in these kinds of hotels. 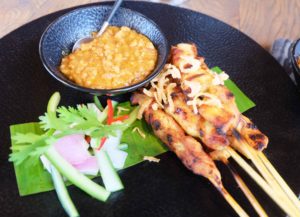 Lah Lah was quiet for lunch – a few business tables here and there, but mostly empty.  The décor is a mix of modern murals with traditional trinkets.  There is a pleasant residential feel to it, with a backless bar and plenty of natural light.

The Serb and I hadn’t been out for quite some time (ask the Serb about that), so once again, my enthusiasm dictated our ordering.

We ordered the vegan rolls, corn fritters, duck gyoza, BBQ rib bao, the satay chicken skewers, and a berry blast.  I reeled this list off to our waiter who wrote nothing down, seemingly committing it to memory.   I was seriously beginning to think he was really a guest, who was too far committed to this charade to come out with the truth. 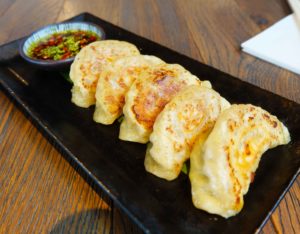 Our food arrived in no particular order, but the flow and timing were spot on.  We got the two vegan dishes first- the vegan paradise and corn fritters.  Perhaps vegans are known to be always hungry, so their food is prioritized in the kitchen.

The vegan rolls were made of avocado, quinoa, cucumber, and pumpkin.  They were average, and the drizzled relish was nice.   However, the corn fritters won the vegan battle – greasy, hot little fried disks of corn and tofu with the chunkiest peanut sauce I have ever seen.

Next up were the chicken skewers which were dry, rather dull and a bit meh.  Luckily the duck gyoza potstickers swooped in and saved the day.  Crispy gyoza skins, stuffed with aromatic, flavourful duck meat and a sweet, sharp soy sauce.  Simple but delicious.

The BBQ ribs to bao buns ratio was crazy – eight ribs for just two buns.  There was no way I could fit four ribs into a single bun.  I tried though and judging by The Serb’s expression, maybe a little too hard.  The ribs were great, although the BBQ sauce was a touch too sweet for me. A good BBQ sauce is tangy and should confuse your taste buds. 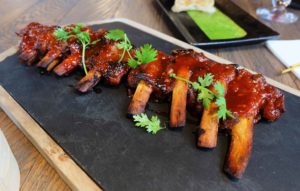 “Do you think the staff will start singing and dancing soon?” The Serb asked, with half a duck gyoza impaled on a chopstick.
“Why would they do that?” I asked carefully, pretty sure I knew where this was going.
“Because they do in the film,” she replied.  I was right.  She was thinking of Ryan Gosling again.

No-one stopped by to ask us how the meal was, but to be honest, I wasn’t expecting anyone to.

Lah Lah is a reasonably good hotel restaurant.  Overall, the quality of the food is strong enough to warrant a repeat visit, but I hope that Lah Lah at night is a little more engaging and “community” friendly than lunchtime Lah Lah.

As we left, I’m pretty sure I saw our waiter pick his car up from valet. 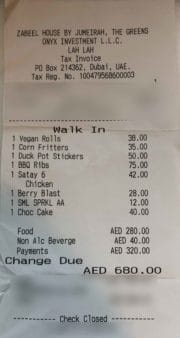