La Petite Maison is a restaurant that is unmistakably satisfied with itself, and after so many years at the top of various lists and awards shows, it has good reason to be.

With a dwindling “it” crowd whose loyalties are more fickle than an Instagram influencer, it is that much more impressive to remain at the top for so long.  You could count the number of restaurants who do that in Dubai on Mickey Mouse’s right hand.

Arriving at Le Petite Maison is somewhat stressful.  There were about seven members of staff hovering around the vicinity of the reception desk.  With all of them looking at you expectantly as you enter, it’s difficult to know who to approach.  Being an industry expert, I went straight for the gentlemen standing behind the computer screen.  He stared at me politely, while I gave him the reservation details – aware that six other people were listening intently.  The computer screen man said nothing in response.  It was the man standing next to him, working a tattered paper pad with a well-used pencil who answered.  So much for my industry intuition.

I love LPM as a restaurant space.  There is something so effortlessly sophisticated and elegant about it.  It is neither overly feminine or masculine.  It is for everyone – it is the restaurant equivalent of CK One by Calvin Klein.

An almost perfect square, the restaurant has a semi open kitchen in the bottom left and the bar along the wall to the right.  Booths, tables, and banquets make up the dining room, with neutral wood wall panels bought to life by colourful artwork, soft caramel leather booths sharpened by crisp white table linen, and diamond cut mirrors as an infinite backdrop to a lava top bar counter.  It is a brilliant interpretation of an upscale French brasserie, and the only dining room that came close to LPM was the ill-fated Frioul Bistro De Luxe down at the Souk Madinat.

From the Southern French region of Nice, the surrounding countryside and even venturing as far as Liguria in Italy comes Niçoise cooking, the cuisine of choice for La Petite Maison.

Nicoise cooking and by extension, LPM’s menu, is vivid and healthy, with a focus on vegetables and fish.  It is honest, uncomplicated and simple, based traditionally on what is available from the land and sea.  It is designed with olive oil rather than butter and cream; is light rather than drowned in rich sauces.  Their liberal inclusion of Italian influences allows them to sneak items like burrata and pasta beef ragu onto the menu. 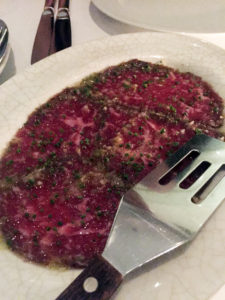 I’ve heard some people call LPM a romantic restaurant – I suppose it is if you’re comfortable being judged and scored, by the table next to you on every cheesy romantic line you utter.  I’ve heard that some of the tables are so close together that people have left with different dates to which they arrived with.

I never really saw our waiter, as I was sitting with my back to the restaurant and the spaces between the tables are so tight that he could never squeeze into my field of view properly.  My LPM experience was largely just different sets of hands delivering and taking things from the table.  Part of me is glad I never saw him – he had a wonderful voice and very handsome hands, and I’ve painted a perfect picture of him in my mind – I don’t want to ruin that.

We ordered the endive salad and beef carpaccio to start and then the duck a l’orange and the beef ragout with green beans, broccoli, and chips.

The service was very functional and well-rehearsed, but quite impersonal – they lacked the charm and care they once had, I feel.  Don’t get me wrong, the service team did everything correctly, but it was all quite mechanical and stiff.  Although we did have to chase down the bread guy a couple of times – he was far from mechanical and stiff – he was quick and somewhat elusive as he darted around the dining room depositing slices of bread on people’s plates.

Our starters appeared as if by magic, delivered by numerous sets of hands, which I presumed were attached to bodies.

Strangely, for a fine dining restaurant, the food arrives when it’s ready – however, there is no denying that LPM has got their menu down to a fine art.  The food was of the highest quality – flavours, textures, quality of ingredients – all were exquisite.  There are no short cuts taken here, no oversights or mistakes, no heavy hands or forgetful minds – and certainly no activated charcoal croutons or unicorn consommé.

The crisp endive heads were coated in a gloriously balanced mustard dressing with soft chunks of fragrant blue cheese, crunchy walnuts and slivers of sweet apple served on a classic white plate. 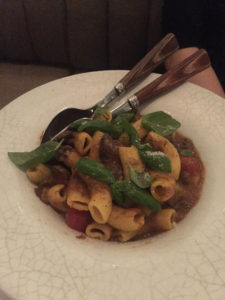 The beef carpaccio was the colour of a young Burgundy, speckled with white marbling and drizzled with olive oil and chives.  There was a delicious satisfaction of using the spatula to gently coax the meat from the plate and then stuffing it in your face.

LPM’s secret is being able to elevate their dishes far beyond their origins.  The pasta ragu is the perfect case in point.  A simple peasant dish, made in various incarnations across the whole of Europe.  With LPM’s version, the beef in the ragu was soft and tender and was almost like nan’s homemade goulash, according to the Serb.  When a dish creates nostalgia and emotion, you know it’s done a good job.

I ordered the canard à l’orange, a super old recipe, from when kitchens of the Middle Ages used citrus fruits to preserve meats.  The waiter’s hands arrived again, carrying a plate with two plump duck breasts, glistening with a silky orange glaze.  The meat was tender, fatty and punchy with flavour and the orange sauce coated my mouth with a sweet, slightly sharp tang.

La Petite Maison, with a fleeting appearance in the top 100 restaurants in the world, is one of Dubai’s best advertisements for F&B.  However, despite the food being as excellent as I remember it to be, the service and atmosphere feel somewhat mechanical and procedure driven.  Every single service touch point was done – crumb down, removing of un-necessary tableware, but with little charm or charisma.  Tables turned, out by 9 pm – we get it, you’re busy, but show us some love, LPM. 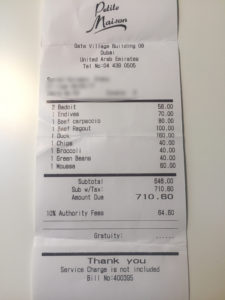