La Carnita is downstairs in the InterContinental Hotel in Dubai Marina, having taken over the old Ynot? space, who I guess, finally got their answer.

Walking into La Carnita, you are blinded by a sizeable backlit signboard saying, “Kiki Loves Us.” The Serb asked me who Kiki was, and I promised her I didn’t know. 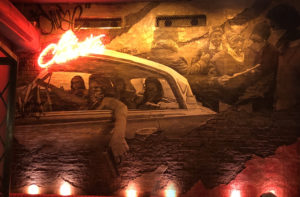 The vibe – it’s urban and edgy and very “street,” whatever that means in Dubai.  Edison light bulbs are still in fashion it seems, and they have put some of the booths in cages for extra security.  I guess the streets can be pretty rough in the InterCon.  The artwork is impactful and unique.  The main feature wall is a large gritty black and white image of what appears to be members of a gang driving to a gun battle.  Either that or its the staff transport on a bad day.  The music is a mixtape of genres but quiet enough to be able to hold a conversation.  The lighting is dim but bright enough to be able to read menus.  Which is what I did.  The Serb had already ordered and received her wine and was too busy to bother herself with a menu.  She, once again, left it up to me to decide.  If only she did that for everything else in our lives.

The menu fits comfortably onto one page, which immediately scores points for me.  Overly large menus make me suspicious.  The menu is almost identical to the Canadian venues, which not surprising for a franchise model.  There are starters, tacos, mains, and sweets.

We ordered the three dips and chips and the Mexican street corn to start.  I was worried that the table was going to be too small for all the dishes, but the team did a great job in spacing the delivery of the courses.  The Mexican corn looked great, and the server suggested we might need to wear gloves to eat it.  I immediately thought how difficult it would be to eat a corn on the cob wearing boxing gloves, so I declined.  I’ll take my chances if anything happens.  As it happens, the corn was great – a nice topping of crema, añejo cheese, with a kick of chilli powder. 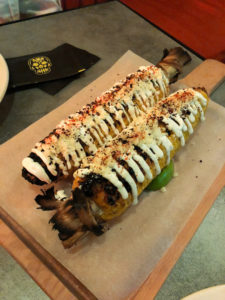 Tacos, like pizza and burgers before them, are becoming a global cuisine and I think people aren’t so worried about staying true to origin anymore.  Bring on the crazy flavours, experiment with sauces and toppings, try different formats.  It’s how foods evolve, after all.  La Carnita’s taco menu consists of nine choices, ranging from crispy cod with a Voltron sauce, (It appears that Voltron, otherwise known as Defender of the Universe, has launched his own sauce range) to a grilled chicken with pineapple and jalapeno salsa and even a crispy cauliflower taco with charred pepper hot sauce.

We were informed that the tacos were tiny, our waiter making a circle with his fingers about the size of a one dirham coin to prove his point.  He also informed us they arrived solo, and we should order a whole gang of them.  He’s absolutely right – these streets are no place for single tacos to be wandering around.  We (I) went for three – the Pollo Frito, chicken with a peanut lime hot sauce, the Mexican beef chorizo, with mango salsa and habanero mayo, and the crispy Oaxaca cheese taco with chipotle sauce.

By this time, the Serb had finished her Pinot Grigio and complained that it was off because there were no bubbles.  The fact that she thought she had ordered a glass of Prosecco isn’t the surprising part in this.  What’s impressive is she still sat quietly and finished it despite thinking it was off.  That’s the Slavic perseverance coming through. 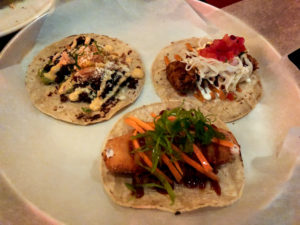 The tacos arrived on a tray altogether.  They were much bigger than a dirham coin, thankfully.  The toppings were generous, and they looked lively and fresh.  Chef Lara Said has a serious culinary background – Restaurant Gordon Ramsay, LPM, La Serre, Jean Georges, and Il Burro are to name a few kitchens she has worked in.  They say you sling tacos, in the same way you flip burgers, but I can’t imagine Chef Lara doing any kind of slinging – she’s far too refined for slinging.  However, she has a cracking grasp on flavour and texture, and it really comes through in her execution of the recipes.  All the tacos were on point – flavourful, balanced and delicious.

For mains, we tried to order the beef short ribs but once again our server gave us fair warning and informed us the Carne Asada, or ribeye was the better option.  Despite not being able to size tacos correctly, he seemed like an honest kid, so we went with the ribeye.

We were not disappointed.  It was a good cut, well cooked, with a sharp salsa Picante that was balanced out by a smooth black bean crema. 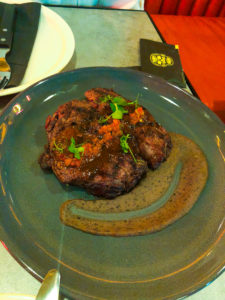 However, for me, the winner for me was the Pollo Frito –hot strips of chicken, folded into warm corn tortillas with salsa, a squeeze of peanut lime hot sauce, finished with a squirt of thick cultured cream, lightly done and delicately favoured.  A formidable few bites.

La Carnita also has a solid bar experience to it, and it could act as a great social hangout for those people trying to get off the mean streets of the Marina.  The staff were really very good – bags of personality, and I almost wanted to ask them to come hang out with me after the meal.  They were having fun with their tables, engaging, chatting and laughing.  It was refreshing to see.

Overall, I am pleasantly surprised by La Carnita.  Who would have thought it – a Canadian taco joint in Dubai. 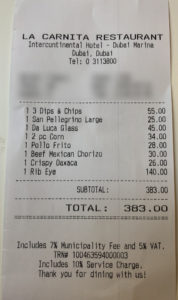