I haven’t reviewed a restaurant for quite some time, because the last restaurant I visited put me into such a bleak hole of dispair that it took the Serb months to gently coax me out of my miserable existence and convince me there are still good restaurants out there.

Which is why we found ourselves in a Downtown car park, white knuckles on the steering wheel, (mine) Chapstick reapplied (hers) ready for our first venture back into the eating world.  We were on The Boulevard, a never-ending avenue of nameless buildings and restaurants, going on forever.  Well, until you find your exit.

Our destination was Kizmet, a new restaurant by the people behind Baker and Spice.  It was either Kizmet or Hell’s Kitchen, and in my fragile state, I don’t think I could handle the drama of Hell’s Kitchen. 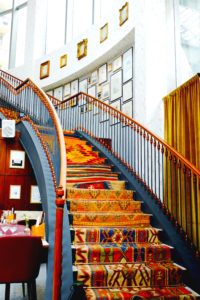 Kizmet is in a tall, oval building directly behind the Dubai Opera house, which I have since learnt now has its own district.  We do like handing out district names in this city, don’t we?

There were Middle Eastern rugs spread out at the entrance, like some Marrakesh souk stall, with a bright, bold Kizmet sign above the door.  Kizmet, of course, means fate or destiny, but is actually derived from the Arabic word, ‘qisma’ which is basically a fancy way of saying Inshallah.

We had made reservations, but there was no need – the place was quiet – it was in the middle of the most confusing week of the year, those five days between Christmas and New Year where you have no idea what day it is or what you are meant to be doing.  We were given our choice of tables by the friendly hostess.

Kismet has two floors, upstairs and downstairs, which is generally how floors work.  We sat downstairs in the main dining room, a visually striking, but rather eclectic room.

If you asked an interior designer to put Kizmet into a box, I fear their head would explode.  There is a kaleidoscope of design elements, from the Boho carpeted staircase, to off-white hexagonal mosaic floor tiling, the black kitchen subway tiles, a little bit of Art Deco, some Miami Chic, a few Chesterfield booths, terrazzo, touches of millennial pink, indoor palm trees, and hipster brass cocktail shakers.  It’s as if Pinterest malfunctioned and created a restaurant.  But it bloody works, you know.  It is a great looking room.  Classy, contemporary and creative. 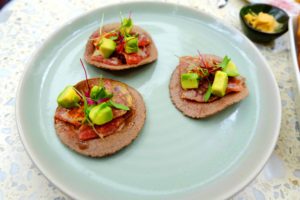 The only strange thing in the décor was the 4,000 sq meters of brown velvet curtain covering the windows that wrap around the whole building.  That’s so Ancient Rome, Circa AD70.

There is a completeness to the main dining room – it houses the seating area, and the kitchen and bar all in one room.  It is homely, intimate and unpretentious.  It is casual but refined and very welcoming and easy going.

The ordering is done in the style of Noodle House, Din Tai Fung, and IKEA.  A little stack of menu cards sits on each table, and you mark what you want yourself with a little black pencil and throw it at a passing waiter.  That’s a lie, our waiter was super attentive.  In fact, I kind of wished it was a little busier, so he would have more to do.  He did far too many slow walk-bys past our table, which puts The Serb on edge.  Something to do with her childhood.  As usual, I didn’t want to ask, and she didn’t elaborate. 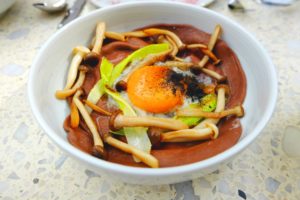 Much like the décor philosophy, Kizmet’s food also doesn’t fit into a nice neat box.  Kizmet is no friend of the listings department at Zomato.  They claim that the restaurant is run on the simple idea that the ‘food we grew up with should never be forgotten.’  They clearly have never tried my mother’s marrow stew.  However, the menu is a concise list of 25 items, stealing and blending global flavours, textures, and ingredients with carefree abandon.

“Grilled Octopus?   Put some potato foam with it.  Yes, foam from a potato.   Just squeeze it hard and shake it fast.
Hummus, you say?  We need tofu with it.  Wait – not cubes, make them into churros.  Yes, you heard me, churros.
What’s next, Pastrami? Serve it with a potato bun.  And add some coffee jus, because f%$k it, we’re in the Opera District now.
Arancini balls?  Love it, but it needs a twist.  Throw an octopus at them.
Watermelon and halloumi salad, yes, genius, but add some chopped cactus from Mexico, because Edgar’s from Mexico and I’m from Lebanon and we are sick and tired of these walls being built!” 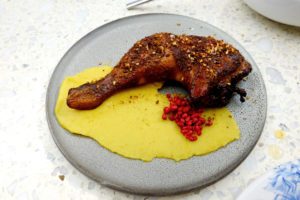 I mentioned earlier that name Kizmet was a fancy way of saying Inshallah, and I think I know where they got that idea from.  This was apparently another conversation between the management team during planning.

We chose the tuna tostada, hummus with tofu churros, pasta sheet, smoked leg, and the duck pizza.  It’s a tapas style sharing menu, which removes unnecessary formality – precisely what the Serb and I need in our relationship. 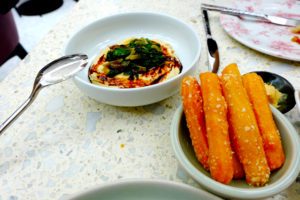 Overall the food was a triumph of fusion and creativity.  The churros were inspired – little sticks of tofu with a crunchy bite and soft fluffy insides.  The smoked chicken leg had an incredible texture and crust, with the harissa spice tingling on your tongue.  The tuna tostada was fresh, tangy and lively.  The flavours were playful, bright and well balanced for the most part.

The duck pizza was so-so, I think they could probably move towards global flatbreads, like Galettes or Pide for example, and own that space a little more.  There are a lot of people doing excellent pizza around town at the moment.  The pasta sheet dish, their version of a deconstructed ravioli, was a disappointment.  The parmesan broth turned the dish into a watery ricotta mess and trying to fish the pasta sheet from the broth was like trying to extract a bit of eggshell from a cracked egg.  Just when you think you’ve got it, it gets dragged back down again. It was a little of style over substance for me on this one. 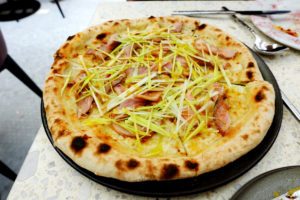 The guys behind Kizmet have understood the mood of the market and created a real egalitarian space, where Dior is as welcome as Giordano, and flip-flops sit side by side with Louboutin.  The pricing is reasonable for its Opera District location and the service team are helpful and switched on.

Kizmet is fresh, relevant and on point.  It has restored my faith in the industry, and if this is a sign of what’s to come in 2019, then it’s going to be an outstanding year.