Peruvian have Coya, Mayta, and Inka. Asian have Nobu, Okku, and Hakkasan. Turkish have Besh, Nusr-Et, and Ruya.  Now it is the turn of the Progressive Indian. First, we had Tresind, Farzi, Carnival and now Jaan.

Jaan was one of the higher-profile openings this year – for those not in the know, some of us bloggers get complimentary invites to special tastings. I don’t know what goes on at them as I have never been to one, but I can image a lot of VIP treatment, photo opportunities, and happy PR companies.

Jaan was particularly active on this front, and judging by the amount of coverage on the blogosphere, there was a good turnout by hungry influencers with their fancy cameras and large Instagram accounts.

The room is cavernous – sitting on a high floor, with high ceilings, Jaan immediately brings a sense of grandeur and occasion to the evening. The dining room wraps around the outer walls of the floor, with views overlooking Dubai. When we arrived, the place was cold, empty and quiet, save for the click clickity of our hostess’s heels on the polished tiled floor. John Lennon’s face adorned a large graffiti feature wall, which offered a much-needed sign of life and colour. It was almost as if Lennon was begging us to “Imagine” as we walked past.  Imagine all the people, perhaps.

The hostess was friendly but lacked conviction. I’ve said this before – there is something magical about someone taking the time to welcome you properly to the restaurant and engage in some storytelling to get you in the mood. I was disappointed when this didn’t happen, but Jaan isn’t the only restaurant that doesn’t get this right.

Had I turned up at the bloggers night, I’m sure they would have told me everything I would have needed to know. They would have said that they are progressive Indian, taking culinary influences from Japan, the Far East, and Europe. They would have explained that the owner is a super famous entrepreneur, chef, caterer and overall hero in India. However, I didn’t go to the freebie night, so I have no idea about any of that, including why a John Lennon picture is in an Indian restaurant in Dubai. Well, it’s either Lennon or Gandhi.

There is an open kitchen, where the cooks walk back and forth as if they were warming up for a fitness class. When the chef is wearing a Mr. Mayagi bandana and a microphone headset, he is either going to host a Les Mills Body Pump session, or things are about to get serious in the kitchen. I told the Serb that the neck cracks and lunges were all part of the drama. I’m just glad she didn’t see the burpees from the sous chef and the star jumps from the commis.

Progressive Indian is a move away from the typical dishes of all Indian restaurants – dishes like the much-loved butter chicken, paneer cheese, and naan bread.  Progressive Indian is an exploration into cuisines like Japanese sushi and Spanish tapas – all with an exciting Indian twist.  Faced with such an opportunity to push the culinary boat out, we immediately ordered the butter chicken and paneer cheese with a naan basket.  We are nothing if not adventurous.

We also ordered the cold smoke chaat and cherry wood chicken as well – just to keep the hecklers away.

The cold smoke chaat arrived in a liquid N20 smokescreen and took me back to 2008.  It’s a little overdone now as a gimmick, although the dish itself was fragrant, lively and fresh – puffed rice, with frozen dhokla and aromatic spices. We were both enjoying the dish, until an errant and particularly vicious chili made its way onto the Serb’s fork, instantly rendering her taste buds useless for the rest of the meal.  Such was her suffering; she made the outrageous claim that she wouldn’t feed this dish to her worst enemy.  She was emotional and didn’t mean it. Maybe.  I, however, found it refreshing, light and highly enjoyable.

The Cherry Wood Chicken – 5 chicken tenders which again arrived in an unnecessary cloud of smoke were generous tenders of juicy meat.  They were punchy, fiery and made the back of your neck tingle with a delicious, lingering heat.  However, any subtlety of the cherry wood was obliterated by the spicy marinade.  Excellent chicken tenders, but I just couldn’t appreciate the cherry wood. The Serb couldn’t even tell it was chicken – she was still suffering from the chili attack earlier.

There are elements of Jaan that border on being traditional and somewhat conventional.  However, they are just about saved by a few touches of quirkiness and eclecticism. The room would be rather dull, if not for a few flashes of fun and difference.  Their progressive nature seems not to have permeated throughout the entire concept, and in hindsight, I think that balance is needed.

Our mains arrived, butter chicken and paneer cheese with jalapenos khurchan. The butter chicken arrived in a cute little tin that your grandmother would use for her spare buttons and teeth. The lid had a fun Ghost Busters logo renamed Ghost Butter.

However, here’s the thing about butter chicken. It is an accessible, delicious dish that is on every Indian menu I have ever read.  It costs around 32 dhs from street side restaurants all around Dubai – even with rice, it’s still under 40 dhs. I understand that Jaan gives the chef a headset microphone and lots of smoky things, and there are high rent and great views and alcohol is served.  I get all that, but to charge 125 dhs for the same dish, (155 with rice) it better be a spectacular butter chicken.

I’m talking single-udder butter from cows that are in a Scandinavian welfare program, and the happiest chickens this side of Thanksgiving.  Serving it in a ghostbuster tin is unfortunately not spectacular enough for me.  It was a great tasting dish, don’t get me wrong, but wasn’t any better than I have had elsewhere. The Serb was still no help – her face now numb from the chili, she couldn’t even pronounce butter chicken, let alone taste it.

The paneer khurchan was delightful and showed the command the kitchen had over their spice rack.  Khurchan literally means scraped, so the strips of bouncy, soft cottage cheese are ‘scraped’ from the pan after being cooked with capsicum, jalapeno, and spices.  Mixed with hot naan bread from the basket, it makes for a very satisfying dish.

We ordered some dessert as well, but dessert is the Achilles Heel of every Indian restaurant. Mango, saffron, cardamom and milk – those are the only ingredients chefs are allowed to use, it seems.  We ordered the Nirvana, a saffron panna cotta with a raspberry coulis.  It was good but wasn’t good enough to finish between two of us.

Jaan has joined a crowded market for progressive Indian and will find it difficult to stand out from Tresind, Carnival and Farzi, who effectively do the same thing. We enjoyed the evening, and by the time we left, the place was full and buzzing and had a great energy.  The menu is fun and sophisticated, with a good understanding of flavours and fusions.  Service is sharp and attentive, and the sense of drama with the dishes is fun and different.

However, it comes at a price. 700dhs for two, without alcohol, is an eye-watering price tag for a bit of smoke and a ghost buster tin.

As usual, I pay for all my meals, and I attach each bill to the review, to provide a bit of transparency and credibility. #noreceiptnoreview 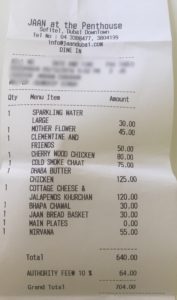