Izu Brasserie has just opened in the Le BHV Marais department store in City Walk – except I’m not sure anyone has informed BHV about this.  I don’t think they got the memo – there were no signs anywhere to guide us, and staff were all rather vague about where the restaurant was located.  Perhaps you have to have a minimum of three shopping bags in your hand before they let you eat.

We eventually found it, by luck, rather than anything else and were quickly seated by a friendly host. 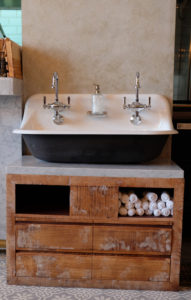 Izu Brasserie has taken a small little corner of the famous French department store and managed to fit a slim little open kitchen, a patisserie display and a long row of banquet seats into an intimate, slightly rustic little brasserie.

Having realized that he has a bit of a knack for cooking, the oral skills of a London street vendor and a name that literally looks good in lights, chef Izu Anil is on a bit of a mission to take over the world.

Fresh from his Lighthouse restaurant in D3, he is now in City Walk and soon to be in Doha as well.  He also has plans in London, Madrid, and Vienna with his newly founded company, YSeventy7 – which apparently, is his old Hotmail password. 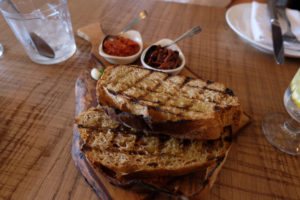 What I like about Izu’s menus are that they are usually concise and considered – they rarely go over two pages and are neat and tidy.  Izu Brasserie’s menu is printed on simple A4 paper and has 25 items including desserts.

His time at LPM is reflected in his menu at Izu Brasserie – the dishes are classic, simple and clean with no avocado, sriracha or quinoa in sight.  It is a safe, reliable menu, perhaps a little too safe.  Starters, pizza, pasta, meat and fish with some sides and desserts make up the choices.  Seabass, prawns, veal, and chicken make up the protein.

Unsurprisingly, the Serb wanted the bresaola and rocket pizza but realized her lack of variety in food choices was becoming an issue in our relationship.  We ordered the bruschetta to start followed by the grilled chicken breast with fresh egg pasta and mushroom sauce and the seabass with a tomato compote and fennel salad.

It was only after we had ordered that we saw the specials board, which was a shame as it had some nice options. 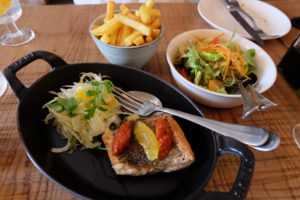 We were served a breadboard with tomato and olive dips while we waited for our bruschetta.  The bread was two generous slices of warm, slightly grilled farm loaf, drizzled with olive oil served with an intense tomato paste and sliced olives.  It was garnished with a peeled raw garlic clove.

It took us about ten minutes to realize our breadboard was the bruschetta.  It was clearly a do it yourself job – even to the point where I was slicing the garlic clove to mix in with the olives.  I felt like Paulie in Goodfellas, except he used a razor blade and I had a dull table knife.  And he was in jail, and I was in City Walk.

The sea bass arrived in a Staub cocotte with a neat little square of grilled fish; skin served up.  I usually don’t like fennel, but Izu’s salad was crisp, citrusy and fresh.  Sea bass is a fatty fish and breaks off in big delicious, almost translucent flakes when cooked properly.  I think Izu’s might have been marginally overcooked as I needed the help of a knife.  The flavour was simple, clean and allowed the quality of the ingredients to do the talking.  The tomato compote looked suspiciously like the bruschetta compote. 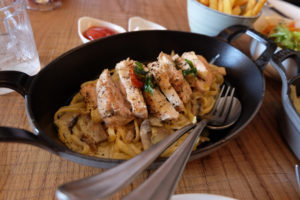 Another Staub cocotte arrived, this time with the grilled chicken breast, egg pasta, and mushroom sauce.  The portions are definitely for one person – they are smaller than a Cheesecake Factory’s appetizer.  That’s not a bad thing either.  I think we could all do with eating smaller portions, sometimes.

The chicken breast was rustic in appearance – it looked like it had a bit of a rough time on the grill and chopping board.  The egg noodles were really good, clearly home-made and with a slightly chewy bite to them.  The mushroom sauce was underwhelming – it was a little too simple and plain for me.  The Serb even said she thought she could make it at home.  Now, I wouldn’t go that far, but I see what she means.

We also had some vanilla ice cream and a tiramisu which was light, creamy and utterly delicious.  The intense coffee balanced perfectly with the mascarpone and I must say, it was worth going in just for that.

There is a hint that Izu has played it a bit too safe with his menu here, but again his quality and understanding of ingredients shines through.

Izu Brasserie is a great concept for its location – a quick, high-quality bite to eat before or after shopping in Le BHV Marais – and I truly believe that as soon as Le BHV realize that Izu Brasserie has opened, they too will agree with me. 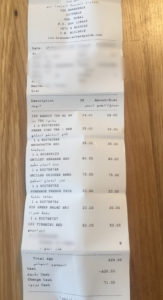