Folly’s entrance is shared with another restaurant, called Publique.  Two reception desks stand side by side, manned by two hostesses, one in black, one in red, both wearing the hopeful look of anticipation on their faces.

Ultimately, every time a group walks through those doors, one hostess is going to be left disappointed. It’s a cruel, cruel world we live in.

Folly is a new venture from Nick Alves and Scott Price, two pioneers of Dubai’s food scene, aspiring to cook Michelin star menus before anyone else in the city.  Two young chefs that have scooped up all the important awards Dubai has to offer, had been flying Gordon Ramsay’s flag for several successful years before launching their own Table 9 restaurant.

After spending a few years on the fringes of the culinary world, launching a range of meal products for Spinneys and running Taste Kitchen in locations that time has not been kind to, Nick and Scott have returned to the spotlight with an ambitious, elaborate and bold venture.  Bringing in the charismatic Viktorija to help run the service can only strengthen their reputation.

The main dining room is quite masculine in feel, with dim lighting, house brick, dark wood and concrete and tile flooring.  The menus are leather, and the cutlery is stacked in wooden blocks on the table. It is an odd canvas for the type of food promised on the menu.

It is almost as if the cocktail menu designed the space, and then the food came afterward. Which is crazy, because cocktail menus can’t design anything.  They are just menus.

We sat at a banquet table overlooking the bar that is tucked away in the corner and the very open kitchen that was the center of attention in the dining room.  Strangely, the kitchen operated in almost full darkness, with a solitary fluorescent lamp in the back providing the only illumination.

The kitchen was full of movement and shadows, chefs scurrying around, cooking, plating, heating, fluffing and doing general cook stuff, moving in and out of the darkness like poorly dressed ninjas in whites.  Rumour has it, in the far depths of the kitchen, one chef has been in the dark for so long, she has developed an angel fish-like head torch in some genetic evolutionary miracle and no longer has a need for the sense of sight. She cooks on touch alone. 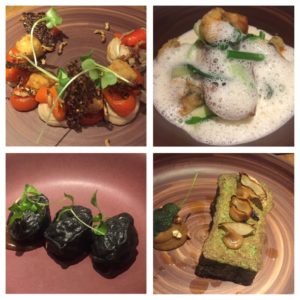 The menu required a full instructional presentation by our well-intentioned waiter.  As my dining partners have the attention span of a 4-year-old in a toy store, they lost interest quite early on in the explanation, and I was the only one paying attention by the end.  Nick and Scott have prepared a selection of twenty-four dishes, across three price ranges and encourage you to try four or five dishes each, effectively allowing you to create your own degustation menu.  Had our waiter used the words either tapas, meze or tasting menu in his spiel, we would have understood a lot sooner.

If Nick and Scott’s last venture was casual food in obscure locations, Folly is the polar opposite, with first rate, fine dining food in one of Dubai’s most premium locations.  Folly means a lack of good sense, or foolishness – a tongue in cheek name for such an ambitious venture.  However, they are backed by Gates Hospitality, who are fast becoming a haven for young restaurant entrepreneurs of Dubai.

Folly was a week old when we dined there – and like anything that is a week old, there needs to be a certain consideration for lack of co-ordination, communication, and general cohesive functionality.

We ordered around twelve dishes –monkfish cheeks, eggy bread, radishes, stracciatella, tofu, sirloin, lamb, crab, cuttlefish, stone bass, and octopus. It was an eclectic and varied assortment of dishes that ultimately showed Nick and Scott’s ambition and bravery.  A fine dining a-la-carte tasting menu served tapas style is perhaps not the easiest culinary task to pull off, and time will tell if they are still able to execute such complexity when really busy. 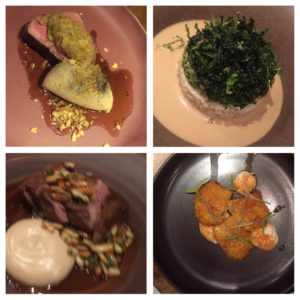 The key to tasting menus first and foremost, before you get fancy with the presentations, and the foams and gels is timing. A tasting menu is a journey – there is a story to tell, and it’s the job of the food to tell it with fluid prose and uninterrupted paragraphs.  Our experience from car to car was a lengthy three hours and twenty minutes.  Timing is key, and unfortunately, Folly struggled with their timing all night long.  However, they have a professional team, and this is not their first rodeo, so I am in no doubt that this will improve drastically in the coming weeks.  Failing that, turning on the kitchen lights might improve efficiency.  According to other chefs I have spoken to, being able to see what you are cooking is a real plus, apparently.

With twelve dishes to describe and having wasted my word count on silly matters, I shall whisk through the food. I apologise for the brevity, certainly no reflection on the quality.

The monkfish cheeks were plump, juicy and came with a wonderful paprika smokiness. The sage eggy bread had a great flavour to it, but was not saturated properly – the result was a dry and plain center.

We ordered the butterhead with crème fresh, but it never arrived.  I’m sure whatever table received it would have enjoyed it – whatever a butterhead is.

The cuttlefish came in a black ink ravioli, and our weird mainland European friend was the only one who ate it and enjoyed it.

The Devon crab with seaweed and basil was excellent – fresh, cold and generous, taking me back to Devon summers and The Royal Regatta in Dartmouth.

The delicate stracciatella was overpowered by the aniseed, but the Omani shrimp married exceptionally well with the marjoram and lime gremolata.  The radishes were disappointing, causing someone on our table to announce that it was merely a garnish on a dinner plate.  The octopus was soft, yet maintained some bite, with a rather rambunctious cucumber and fennel sauce.

The stone bass was cooked well, and the fish arrived moist and fresh in a sea of foam.  The sirloin beef just about ticked the boxes – the potato gratin disguising itself very admirably as a leek and potato puree.  The clear winner was the lamb and pine nuts – a great composition of flavours and textures – the umami balanced with the freshness of the pine nuts and a salsa that danced with a wonderful lightness.

Viktorija, in her wisdom of running some of the world’s greatest dining rooms, approached us at the end of the meal and quite rightly offered to provide a discount on our bill, acknowledging that they “didn’t quite get it right, this evening.”  This acknowledgment speaks volumes of the calibre of the team – the self-criticism and willingness to accept it is refreshing.

Despite being perhaps a little rusty, Nick and Scott have the experience and skills to produce food of exceptional quality.  They have taken a bold approach regarding service style, but have found the right person in Viktorija to manage that.  Although not a perfect execution, I am sure in their drive for perfection, they will get it right sooner, rather than later. If they can do all that in the dark, imagine what they can do when they come into the light. 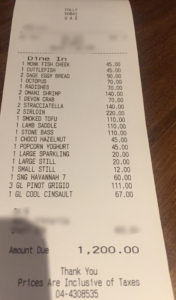 Folly By Nick and Scott