I think after partnering up with JLT Dining once again for their annual micro-community JLT Restaurant Awards, I subliminally influenced myself to return to JLT for a quick lunch the other day.

The Serb and I headed to Cluster F, home to nineteen restaurants. Cluster F is perhaps the most densely populated area of JLT for food places. In terms of restaurant density, if JLT is the Lake District, then Cluster F is Manila. 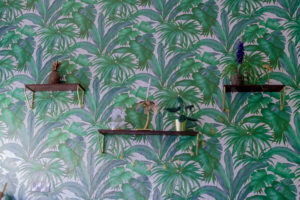 We obviously weren’t going to eat at all of them, but we were heading to a restaurant which sounds like an SEO Bot chose the name for them based on Google algorithms. Favourite Choice.

Their full title is apparently, Favourite Dubai Best Choice Restaurant JLT Number One. They shortened it to Favourite Choice. You might not have heard of them, but that’s because they quietly opened their doors back in March and have been discreetly getting on with it ever since. It’s about time they got a little attention.

As is expected from JLT restaurants, Favourite Choice is a small place tucked around the side of the HDS building with around 35 seats both indoor and outdoor. One whole wall is covered in green foliage wallpaper, and there are sea green upholstered banquettes and playful table decorations like pineapples and leopard salt and pepper shakers. 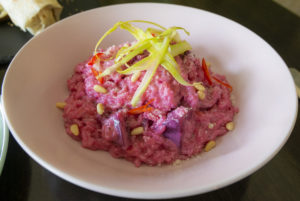 We were greeted by a friendly server who took us to our table by simply turning around. The other tables were full, with local business people from around the area. With a two-course business lunch for 47 dhs on offer, it’s no wonder they were busy.

Our server handed us a menu each and stood there, waiting to see if we would order immediately. Clearly, they are used to regulars knowing what they want. Clearly, she had never met The Serb either, who takes so long that by the time she has chosen what movie to watch at the cinema, it has already been released on Netflix. I indicated she should come back in a few days for our order.

The menu is fantastic – one of the most fun and interesting menus I’ve read in a while. It is a menu with considerable thought and talent behind it. The ingredients are varied and exciting, and the flavours different and appealing. It takes you on a fun, entertaining journey of discovery and there is clearly a lot of love and personality in the place. You really feel it, not just in the menu, but the tone of voice, in their signage and in their staff. 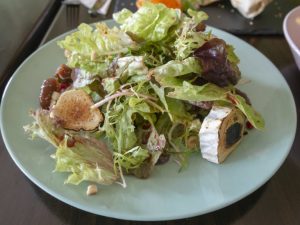 Soups have names like Red Velvet Soup and Same Same But Different, and their salads have names like Back To The Roots, and Don Vito Goes Japan. They are fun, inventive and creative. Don Vito goes Japan for example, is a tomato carpaccio on smokey baked eggplant caviar with a ginger soy sauce and garlic chips. They also have a grilled teriyaki chicken with sweet’n’sour cucumber & spinach called Chicken In The Kitchen.

After a sense of discovery that we shared together, we were eventually ready to order. It was One Night in Bangkok, with a Dolce Vita, Dressed in Red. The Serb and I both sniggered at our order and congratulated ourselves on how clever we had been. I’m sure the server also thought we were clever, but as a true professional, didn’t show it.

Because of the small space, the staff of three engaged in a constant dance of avoidance, moving gracefully around each other, like some Filipino Swan Lake with plates and glassware, serving and clearing tables. They soon swanned over to our table to serve our dishes.

The Dolce Vita was a goat’s cheese salad with figs, celery and green apples, pomegranate and grapefruit, drizzled with a tangy raspberry dressing. It was well constructed, and the combination of sweet figs, bitter grapefruit, and creamy goat’s cheese was delicious. 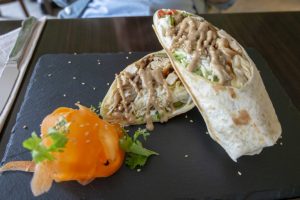 The Dressed in Red was a beetroot risotto with white truffle oil and parmesan. It was filling and had a great flavour; the parmesan created the creaminess, and the earthy beetroot was sweetened by the toasted pine nuts. However, risotto is all about consistency and texture and for me, Dressed In Red needed more stock and more stirring, I think.

The One Night in Bangkok was a peanut chicken wrap with cabbage, mushrooms, pineapple, coriander, sesame, and satay sauce. Sounds chaotic, confusing and captivating, not unlike a real night in Bangkok, in some ways. The flavours were strong, the mushrooms and pineapple working well together, with generous amounts of chicken and a confident peanut sauce.

We finished with Santa’s Choice, two warm walnut cookies and a small jar of cold milk. The cookies were filled with liquid Nutella. I don’t need to say anymore. 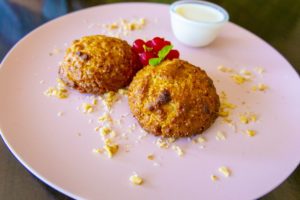 Overall, Favourite Choice restaurant is a little diamond in the rough – a bold and brave menu, in an environment that has a lot of soul and character. It is almost as if the menu deserves a more spacious restaurant and kitchen to breath and grow and mature in.

Cluster F is very lucky to have you, Favourite Dubai Best Choice Restaurant JLT Number One.