On the advice of one of my readers, I decided to try Il Borro, the new Tuscan Bistro at the new Jumeirah Al Naseem.  Having called the hotel to determine their opening hours, I was relieved to hear they were open for a simple lunch and not some high drama brunch.  However, the truth, it turns out was very different.  They weren’t serving lunch or brunch.  They were serving nothing. Lights were on, but no one was home – literally.  After again getting clarification that they should be open from the hotel, we made a difficult decision to eat somewhere else.  What a disappointment – making sure your advertised opening hours are correct seems an obvious move for a newly opened restaurant.

So this is the reason why we ended up at Dragonfly, a new Asian premium restaurant in City Walk.  Not to be confused with Dragon Mart, which is what the Serb did, when she entered our destination into the Sat Nav.  It’s better if we don’t talk about that, though. It’s behind us now.

We couldn’t have picked a more different type of restaurant if we had tried. Going from a Tuscan Bistro to a premium Asian is like drinking orange juice when you are expecting milk.  For a brief moment, your body shuts down in an utter panic until your brain catches up with what’s happening and you realize it’s only orange juice, and you’re not going to die.  It’s exactly like that.

We wandered in off the street and grabbed a banquet table at the front of the restaurant.  During the summer months, the place is going to be intimate, however, when the weather is perfect like it is now, they have a decent amount of seating outside.

If the Family Feud game show producers had done a nationwide survey to ask what should be in a Chinese restaurant, they collectively would have come back with Dragonfly. The décor is painfully obvious. Red paper lanterns? Check. Faux Ming vases? Check. Cherry Blossom plates? Check. Red booths and carpets? Check. I don’t think there is a more Chinese looking restaurant in the whole of China.  The red furniture spills onto the street like petals falling from a rose.  Or blood splatter from an interior design crime scene.  But perhaps that is the point – perhaps they are being ironic.

A meal at Dragonfly is a full on experience – don’t expect a quick bite to eat – when you sit at one of the red booths, you are committed. Luckily, it seems Dragonfly is equally committed to providing that experience.

Our waiter proudly slipped into his well-practised spiel about Dragonfly, and when he asked if we had heard of Chef Tim Raue, I nodded knowingly, despite having never heard of him.  If Chef Tim Raue ever needs his biography written, I’ve found his ghost writer.  Long story short – he’s a German chef, two Michelin Stars under his belt and Dragonfly is his first restaurant outside Germany, where he oversees eight different restaurants.

Our incredibly knowledgeable server then gave us a presentation on the quality of the food, and the key elements that were important to Dragonfly – 10-year-old soy sauce, Chinese and Thai ingredients with Japanese simplicity, etc.

We were then given an IPad, so we could look at some images of the dishes and zoom in on a few of the details.  It was all very intense and interactive. I don’t think you could go to Dragonfly and be a passive participant. They have put a significant effort behind their menu, and they demand your involvement. I was half expecting to be given homework to do when I left.

We were finally allowed to place our order and went for the duck dim sum and tuna pizza to start, followed by the Shanghainese beef and the lemon chicken.

Our duck dim sum was a disappointing start to the meal – it was a little dry, despite a wonderful jus drizzled over it and the meat was flavoured with an over abundance of ginger – a root not known for its subtlety in taste.  Ginger will punch you in the face if you’re not careful.

The tuna pizza was a tuna tartare on a thin, slightly crispy filo pastry base. The mustard pickles provided a spicy layer of crunch, and the tuna itself also boasted a particular spice as well. The tiny dice of tuna were kept room temperature, to allow the flesh to relax a little – but in hindsight, I would have enjoyed it more served cold and firm.

At Dragonfly, the kitchen has produced a great cohesion between flavour and texture and a deep understanding of ingredient and technique.  Take the pickled red radish for example, with coconut coriander cream and young coriander sprouts.  Barely more than a bite, the radish was cold, fresh and crunchy, and the coriander was exotic, creamy and intense. It is in these sort of dishes where chefs can shine or fail.

The beef was marbled and flavourful, two little strips of tender meat, sitting in a slightly sweet sauce of perfect viscosity. Accompanying them were alternating balls of papaya and tomato and their own purees.

Despite being the most average of our choices, the chicken was still cooked with confidence, and the lemon and parsley sauce had us wishing we had spoons.

Although the majority of the dishes at Dragonfly achieved a cohesion and harmony befitting of Japan’s famous culinary balance, they are also small, dainty and over within two bites.  There is a touch of longing, a hint of dissatisfaction, a whisper of wanting more.

I think the restaurant knows this; I think they know that the food alone will not satiate even the daintiest of appetites, and so they complement the meal with small plates of food that continue to boast of the kitchens superior skill set.  All the little table fillers that are drip fed throughout the meal were exceptional. Nothing was without thought, and no dish was just going through the motions. The entire composition of the meal was the work of a very talented chef.

Dragonfly suffers from the lack of a liquor license, although they make up for it by charging the same price for a juice as they would for some premium grape.

The dessert showcased the challenges all chefs face in Dubai with the quality of ingredients.  The chocolate with pear and tarragon struggled with an unripe pear that was hard and hadn’t yet lost its bitterness.

However, overall the food was of a very high standard, and Dragonfly almost seems out of place in City Walk, next to a coffee shop and empty residential apartments.  It seems like they should be in a 5-star hotel, but perhaps this is the future of the Dubai dining landscape.  Perhaps this is how change happens.

At 440 dhs for lunch, it is not the cheapest, but to judge purely against portion size would not do Dragonfly justice.  Sometimes there is a value to elevated culinary excellence, and I genuinely believe Dragonfly’s menu can justify their prices.

And more importantly, they are open for lunch and if you love the colour red, then it’s a winner.  Just stay away from the juice. 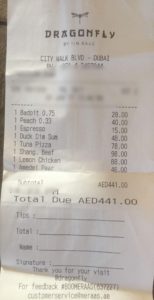