If a British artist decided to open a café and build it, largely by himself, in some obscure space, in some unknown neighbourhood, then that is what Cabin would be.

Which is funny, because that’s exactly what happened.

Food and art is not a new thing – not by a long shot.  Food has always played a role in art.  Even Stone Age cave painters used vegetable juice and animal fats in their paints.  Going even further back, when More Café first opened, they used their walls as a canvas for local artists.  Some might even say the combination of food and art has been a little overdone. 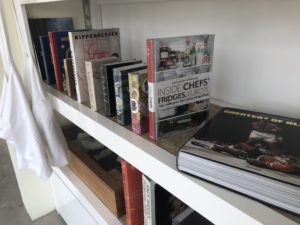 However, Jonny Gent is a legit artist – his work has been shown in galleries and exhibitions worldwide.  Serious art collectors seek out his work.  He has been featured in globally recognized publications.  He gets inspiration from cool stuff like books, music, food, gardens, castles, cars and the way his dad shaves.  He has also just opened a café in Barsha South.  I have no idea why, but I’m glad he did.

Cabin is an indoor/outdoor, upstairs/downstairs kind of place.  It’s quirky, amateur and unpolished.  It is clearly a labour of love for Gent.  The patio is encased by a large untreated plywood fence.  If you look up, there are ripped strips of bedsheets that provide somewhat unequal shading for diners.  If you look down, there is rough concrete flooring and dusty plants.  It is as if my dad had built it over a long weekend.

The patio is actually on an incline, so nothing is quite straight.  If the chef serves anything round, he’ll be in trouble, as it is likely to roll off the plate and into Barsha South.  Peas, melon balls, meatballs, grapes, cherry tomatoes – these are all off limits to the chef.  It must be difficult to work with such culinary restrictions.

Inside is a narrow-elevated corridor that is home to a curated selection of arty stuff.  Notepads, pens, books, small naked men, etc.  All of it is available for purchase.

The actual café is down a short flight of stairs where the kitchen shares the room with several large American style booths.  There is, of course, art on the walls, although I didn’t see the Warhol or the Hirst that are apparently on display there.  However, I wouldn’t know Picasso’s Pomegranates from Munch’s sunflowers if they hit me in the face.  The room is like a studio – it is functional, quirky and welcoming.  It is also a little rough around the edges.  The extraction doesn’t get rid of the stronger smells, and seating efficiency is terrible.  The décor is an extension of Jonny’s personality, once would assume.  It is charming and unpretentious. 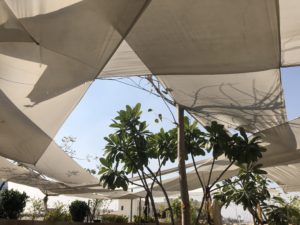 They hand out complimentary carafes of mineral water infused with long strips of cucumber, which is a nice touch and should be recognised.  However, ice would have also been a nice touch, as the carafe got quite warm in the sun, and warm cucumber water is not particularly refreshing.

The service is laid back but good – friendly, accessible staff, clearly empowered and respected by the management there.  They are happy to engage in conversation and seem to know many of the customers and their dogs too.  (Guests brought their dogs with them – they weren’t just asking after people’s dogs, randomly.)

We ordered the broccoli and bulgur wheat and the grilled cheese sandwich.  The Serb very nearly had the cheeseburger, but has recently watched some Netflix food program and has decided she doesn’t want to eat meat for a while.  She ordered the chicken Caesar salad instead.  I know. 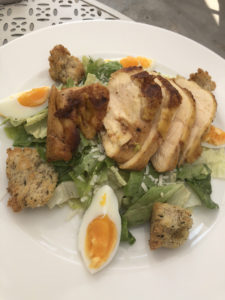 They brought us some sliced bread with a quarter of a demitasse worth of butter.  I see in older reviews the bread used to come with cherry tomatoes as well, but for reasons I’ve already explained, they have had to replace them with a ratatouille of some sort.  Probably.

The menu is elevated café food – it’s tight, with just a few options covering a single page, but with enough variety to satiate most dietary requests.

The chicken Caesar salad arrived with big chunks of rustic croutons and a well-balanced dressing.  The chicken was ridiculously tender and juicy as if it had lived its entire life submerged in some delicious moisturizer bath.  The egg was also perfectly cooked to soft medium as well.  Good job all round on the poultry!

The broccoli and bulgur wheat arrived looking like it was waiting for something else to join it on the plate.  An odd presentation style, but a well-constructed dish.  The broccoli was slightly charred and had a hint of spice to it.  The bulgur wheat was well cooked, and its softness found a harmony against the bite of the pomegranate and broccoli.  My only comment would be that the avocado puree did nothing for the dish. It was there because it was avocado, and for me, served no other purpose.

The grilled cheese sandwich is filled with cheddar and taleggio cheese, sweetened with a tomato jam and sealed with a parmesan crust.  The different flavour profiles of the cheese were good, but drowned out a little by the overly sweet tomato jam.  The key to any sandwich is balance. Nothing should be overpowering. 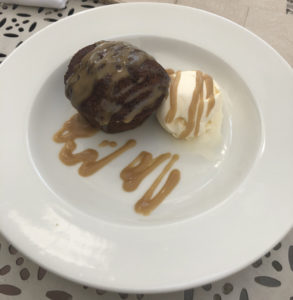 We ordered the sticky toffee pudding with vanilla ice cream.  It looks nothing like what I saw on their Instagram account and was a bit of a disappointment.  It was cold in the middle, and quite dry, not very sticky and was more of a cupcake than a pudding.

For someone who, one day put down his paintbrush and opened a restaurant, Jonny Gent has done a remarkable job.  It is a work in progress, and I think with every piece of feedback given, Cabin will get better and better.  I look forward to watching their journey. 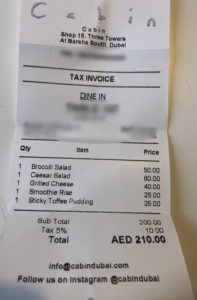