DIFC is terrible for providing directions.  The only destinations they want people to know about are their gate numbers.  I’m looking for BB restaurant, and unless I need to board a flight to get there, I don’t need to know what my gate number is.  They’re located at gate eight by the way.

Also, I have no issue with staring at a little “you are here” icon on an information board to orientate myself, although I know DIFC are not going for the whole startled tourist look.  People in DIFC are meant to know exactly where they are going and how to get there at all times. 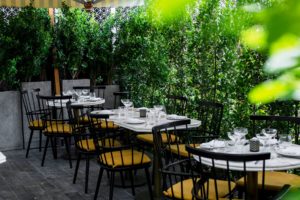 BB Social Dining is the latest restaurant to try their luck at the promised DIFC gold mine.  However, with over 60 restaurants open already, and a few recent high-profile closures, there is no guarantee that DIFC will provide a home run for BB Social Dining.

If you are in a wheelchair, heels or simply ate too many mince pies over Christmas, then BB Social Dining is not going to be very social for you.  There are multiple floors, with tiny spiral staircases and lots of awkward steps, nooks, and crannies.  There are also at least three entrances, on three separate levels, not counting the option of bursting through the terrace foliage in sheer desperation of trying to get in.  The space used to be an art gallery – perhaps they closed down because no one could figure out how to get the art out of the shop, once purchased.

Anyway, the staff seemed young, fit and spritely, and I’m sure by their six-month probation, they will all have the lower body definition of an Olympic weightlifter. 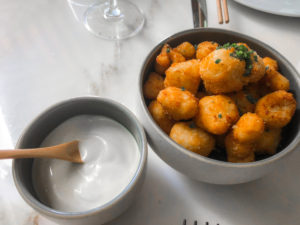 Despite my jest, the place is quite eclectic and the awkwardness I speak of only adds to the character and charm.  There is a quaintness to the décor, a humble nostalgia with black and white flooring and small grandmother curtains on brass rods at the windows.  Yet, the mustard yellow cushions and the steel blue brickwork give the space enough eclecticism to bring it into the modern age.

BB’s tagline is “social dining” which, thanks to the intimacy of the dining rooms, means you have no choice but to be social.  The concept also has a touch of self-indulgence about it.  In their own words, BB boasts of giving the guests a “sense of freedom to design their own experiences based on single-plate meals.”  That’s simply called a menu in all other restaurants.

Speaking of the menu, it is heavily influenced by the East, with bao, bites, bowls, and BBQ as the main sections.  Rumour has it that this is the menu they will serve at the next ASEAN summit.  It’s a rumour I made up.  There are Baos from China, Phos from Vietnam, Ramens from Japan and Brussel Sprouts from, err Santa Claus.  The menu is very inclusive, and unless you are a paleo fruitarian, there is going to find something you like.  If you are actually a paleo fruitarian, I have a number you can call. 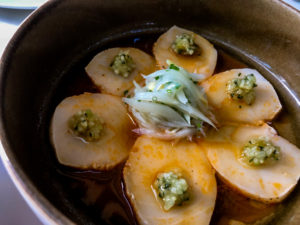 Having not been out for a meal for quite some time, The Serb and I ordered with gusto, enthusiasm, and carefree abandon.  We ordered the butterfish, cauliflower popcorn, chicken pho, crispy leaf potato, Kung Fu wings, crispy duck bao, short ribs bao, and two glasses of water.

The server was helpful, encouraging and knew his way around the menu.  His stamina seemed excellent, running up and down those stairs, but after the seventh dish he brought to the table, he did need to have five minutes on the oxygen tank they keep in the corner.  OK, that’s not entirely true – they don’t have a oxygen tank.

The butterfish was a sashimi dish – six slender gold coins of Japanese butterfish resting in a tangy dressing, topped with finely sliced white asparagus spears.  It had hints of early days OKKU quality; it was that good. 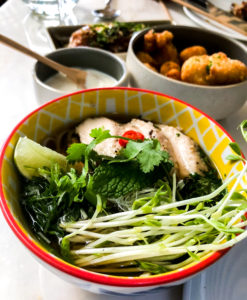 The popcorn cauliflower was moreish by itself, but the accompanying truffle mayo/dip was far too overpowering and turned the cauliflower into a tasteless vessel for truffle cream, unfortunately.

Both baos were great – not entirely authentic, but certainly addictive.  The duck bun with its lime hoisin sauce was better than the short rib, which we found quite chewy with a slightly odd flavour to it.  Both had generous fillings.

The chicken wings had the right balance of sweetness from the honey, and punch from the chili.  They were very sticky, slightly spicy and topped with coriander leaf that acts as a spice time-out for your mouth. 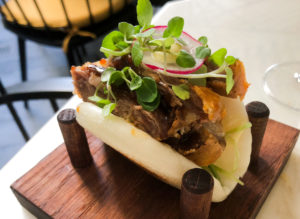 David Chang once wrote that the Vietnamese pho was the future of noodles, and I think BB might be onto an early trend here.  Their chicken pho was a great starting point – the broth was a little one dimensional, but the build of the bowl was good.  It was hot and salty, it was umami and heat, it had texture from the sprouts, and the coriander and mint offered freshness and respite.  A good effort on a dish that often lives in the shadows of the ramen.

By the time we had finished our food, our server looked rested and recovered, so we sent him off again for some dessert – a fry pan brownie with raspberry marshmallows, ice cream, and toffee caramel.  It was good, but then again, I haven’t had a bad brownie since… nevermind.

A home-grown concept from some former Zuma folk, BB Social Dining is a casual, inclusive little restaurant that’s big on personality.  With its multiple levels, cute European terraces and decent Asian inspired food, BB is worth visiting, especially if you’re between gates 8 and 10 of DIFC. 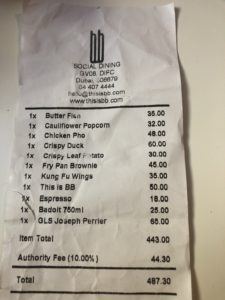