Bao Wow, the Last Exit food truck concept has been upgraded into a full brick and mortar restaurant, in City Walk, no less. That’s like a conference division football team being promoted directly to the Premier League! No testing the market in a JLT or Barsha Heights, no growing brand awareness through a Deliveroo kitchen. No sir! Bao Wow went straight in at the deep end, like an over-enthusiastic toddler on their first day at the public pools.

As a food truck, Bao Wow sells steamed buns, primarily.  Bao Wow as a restaurant however, serves up traditional and modern dishes from across China, Japan, Korea, Singapore and Taiwan.  It has taken over the old Dragonfly location, which was headed up by Chef Tim Raue.  Unfortunately, Dragonfly didn’t last long – you can read my review of it here if you’re interested in reading about a restaurant that doesn’t exist anymore.

Apart from hiring a local graffiti artist to create colourful, urban artwork on the back walls, Bao Wow has done little else to the original fit out, making use of the same furniture and operating equipment.  They have also toned down the red, which was the signature colour of Dragonfly.   It was also the only colour, I seem to remember.

We walked into an empty restaurant and had our choice of where to sit.  The seating consists of two corridors, framing the perimeter of the square space, meaning everything is linear, and I struggled to grasp a sense of the place.  For me, the layout doesn’t encourage community or social connection.  If I was a Feng Shui master, I think my aura would have collapsed in on itself. 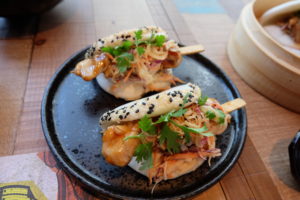 We were seated and our waitress, who was very nice and chatty, handed us a couple of iPads which had the menu preloaded onto them.  She didn’t take the time to explain how a humble food truck on a highway rest area made it to the Premier League, which was a shame.  Maybe she was still trying to find out herself.  This is a personal preference, but I dislike iPad menus.  The menu is an extension of a restaurant’s personality, and how it is laid out, what paper it is printed on, what colours and fonts are used, tells a lot about the restaurant and adds to the experience.  To swipe and pinch and zoom on a screen doesn’t allow me to connect with the restaurant on a deeper level, and that’s important to me because I am a Millennial.  If I had been a Baby Boomer, I think my aura would have collapsed in on itself.  The Serb was using her iPad to check her facebook. 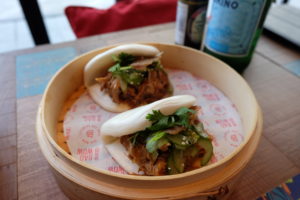 We ordered the Peking duck and teriyaki chicken steamed buns, the chicken gyoza, the beef donburi and a Bao yasai side salad.

They had a sushi maki roll section as well, but ten minutes ago, they were a food truck, so I passed on them.

The food arrived staccato style, as and when it was ready with the salad being the first out of the gates.  It was a great salad – fresh mesclun greens with the snow fungus and mushrooms providing some great texture and some real sharpness coming in from the wafu dressing as well.

The steamed buns arrived, looking like little-stuffed clouds of deliciousness.  The duck was far too sweet for me though, and unfortunately, the meat lost all of its glorious umami.  We also both had to pick duck bones from our mouths as well.  The Serb was very lady-like about it and gracefully deposited said bone in a napkin with little fuss and drama.  However, I was a little more dramatic and acted as if someone has just tried to assassinate me, by waving my arms, coughing and generally spluttering unnecessarily.  Unfortunately, none of the staff were on our side of the seating corridor, so my antics went unnoticed.  Probably for the best. 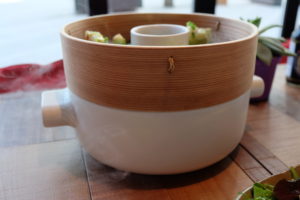 The slaw in the teriyaki chicken bun was dripping with juices, ruining the structural integrity of the bun.  It was wet and sloppy, and not in a good way.  However, the taste was great, and if they can get the slaw right, you’ve got yourself a good steamed bun right there.

The chicken gyoza arrived in a modern steamer basket with some dry ice smoke for effect.  It was a gimmick that seemed forced and out of place and distracted me from what were actually very nice dumplings.  They were generously filled, had a good mouthfeel and more importantly, had excellent flavouring. 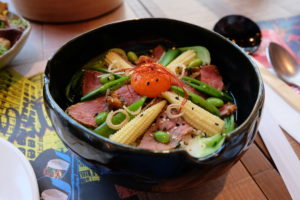 The donburi was the big winner for me.  A Japanese rice bowl with seared beef slices in a donburi broth.  Pak choi, kimchi, edamame and baby sweetcorn made up the rest of the toppings.  Sitting gently, right at the top, was a slow-cooked egg yolk that you broke, allowing the deep orange yolk to seep into the rice below.  It was a crescendo of flavours, comforting and filling.  All it was missing was a sparkler or something.

Despite not looking at the menu, the Serb had spotted the word Nutella and ordered the Nutella Dim Sum for dessert.  What arrived were two mini ice cream cones on a yellow neon plastic stand.  The dim sum were little single-bite pockets of chewy gyoza skin filled with Nutella.  Highly disappointing.  I felt the ice cream cones were there as an apology for the dim sum. 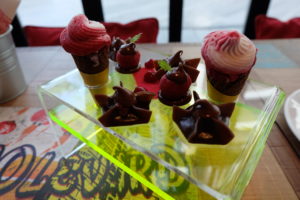 I think Bao Wow will learn some important lessons moving into the Premier League.  There is a big difference between a fast casual food truck concept and a fully fledged restaurant experience.  For me, despite a few sparks of excellence, there was not enough substance for this concept to be a winner just yet.  However, the Donburi was good and the pricing is sensible. 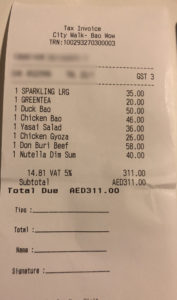