In the 1920’s El Barrio Chino De La Habana or Havana’s Chinatown was the largest Asian neighbourhood in Latin America.  It was a bustling hub of Asian industry that housed laundries, pharmacies, theatres, grocery stores and of course, restaurants.

For forty years, these two cultures merged, and many Chinese culinary traditions, ingredients and techniques soon found their way into traditional Cuban cooking.

For forty years, chefs developed a new style of cooking, applying new flavours and creating new dishes that were the very best of Asia and Latin America.  Chino-Latino cuisine was born.

However, by the 1960’s this progression and innovation came to a grinding halt.  The Chinese left for America in their droves, ingredients dried up and culinary innovation and evolution became a distant memory.

Even today, unfortunately, the El Barrios Chino neighbourhood is just not relevant anymore – it is almost devoid of Chinese people, and there is little talk of the culture and passion the Chinese community once gave to these streets.

What is left is just the perfume of what it was.

But restaurant Asia De Cuba has not forgotten this moment in culinary history and strives to bring Chino-Latino cuisine to Dubai with the opening of their latest outpost in The Westin hotel. 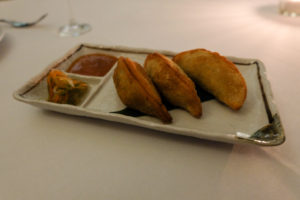 Straight off the bat, let me say what a great fusion it is for a restaurant experience.  The varied and exotic flavours of the East, mixed with the sensuality and passion for life of Latin America.  It’s almost perfect, on paper.

To be honest, my knowledge of Havana and Cuba as a whole is limited to The Fast and The Furious 8 and the song, Havana feat. Young Thug by Camila Cabello.  However, in my mind, that makes me an expert.  I don’t know what else I would need to do to improve my understanding.

We were greeted by two young ladies at the door.  One of them asked us for our reservation details in the same way a worried doctor might ask his patient where it hurts.  We answered her, hoping for the best.  After consulting her computer screen for what seemed like an eternity, but must have only been a few seconds, she nodded to herself and turned to her colleague. 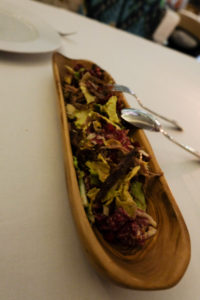 In a quiet tone, she suggested we get taken to table twenty three, like a physician sharing a grim diagnosis with her intern.  She looked back at us and smiled, “Enjoy your final evening,” I think she said.

We were whisked into the main dining room, where we were shown a booth that had a great view of the whole room.  We accepted it with enthusiasm and without fuss, being the perfect patients that we were.

The dining room is a double story space with dramatic foliage and waterfall murals that start on the ceiling and cascade down the walls like some special effect for the movie Inception.  I am sure after a few Cuba Libre it could get quite overwhelming and disorientating.  There is an abstract feature wall behind the bar and open kitchen that symbolises the turquoise waters of Cuba – probably inspired by Vin Diesel driving his Chevrolet Fleetline into the Havana harbour.

The decorative tiling used on the kitchen walls and the cocktail tables is more Levantine and Mediterranean in design than Latin American.  However, I’m pretty sure they were purchased in Dragon Mart, so maybe that’s the Chino side of the design coming through.

Overall it’s a nice room, but it had good bones to start with.  The space used to be where China Grill operated from, and you can still very much see the DNA of the original design.  Replacing vases with plants and adding some paint and wallpaper makes a big visual impact.  However, I worry that for regular China Grill clients, it will be seen as same, same, but different. 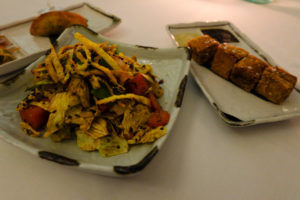 We looked through the menu and skipped quickly past the sushi section.  I’m at a stage in my life where if my sushi’s not hand-made by an 8th generation sushi master, born and raised in Japan, who is at least 95 years old, almost blind and prepares sushi by feel and emotion alone, then I’m not interested.  Call me picky.

Instead, we order the empanadas, fire and ice shrimp salad and chicharrones to start as sharing plates, and then the roast duck salad and short rib beef for mains.  The absence of any of the Serb’s favourite dishes triggers her need for alcohol, and she reaches for the drinks list.  It’s so much cheaper for us when restaurants have burgers on the menu.

Our server is attentive and plucky, having also worked for China Grill.  She clearly knew her way around the menu and was happy to answer any questions we had about the menu.

The room filled up steadily throughout the evening, although almost all of the guests asked to sit at another table from the one they were initially offered.  Unlike the Serb and I, who were grateful to still be alive at this stage.  It was like some weird game of musical chairs.  It’s a place to sit for a few hours, not a puppy you’re adopting.

Anyway, our waitress navigated the room wonderfully and brought us our first round of food.  The empanadas were stuffed with black beans and plantains and were good, except the dough was a little undercooked.

The Chicharrones are not the latest boy band from Cuba but are in fact small cubes of fried chicken (or pork) served with a great onion mojo and honey soy sauce.  The chicken was a touch dry, I think after spending too much time in the frying basket.  The sauce was great, however, and brought the dish to life.

Our fire and ice shrimp salad had deliciously confusing flavour.  It had this whole hot and sour thing going on, with the slightly pickled cabbage and cucumber contrasting against the sweetness of the watermelon.  The shrimp were well cooked, generous and mixed throughout the plate.

The roast duck salad seemed innocent enough until halfway through the first forkful, it sucker punches you with its spicy miso vinaigrette.  In a good way.  The duck meat was shredded and mixed in with the Chinese cabbage and red currants, with a nice combination of umami and vinegar – a good harmony. 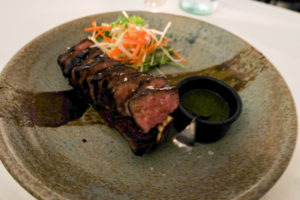 The main event was the short rib vaca fritz, which literally translates as fried cow.  According to the menu, it was 48-hour adobo braised beef which should have rendered the meat beautifully tender.  However, I was left a little disappointed in that regard.  Beautifully presented, it was served with a great Asian BBQ glaze and a tasty chimichurri sauce but was let down by its chewiness.

Asia De Cuba is one of those legacy brands that seem to stand the test of time.  They opened way back in 1999 in London, and are still going strong almost twenty years later.

The Dubai outpost seems to have captured the spirit of Asia de Cuba, and the cooking is, for the most part, lively, fresh and flavourful. The ambiance on a weekend night was energetic and busy, but that was perhaps because no-one could decide where they wanted to sit.

A good recommendation for a fun night out.