Akiba Dori is a new venue in D3, taking over the corner of Building 8.   Designed like a Tokyo street, Akiba is achingly cool, quirky and eclectic, in the way only Japanese pop culture can be.  It is for the young and the young at heart.  It blends gamification, music, food, and drinks effortlessly.  As you walk in, you enter what looks like a Tokyo street, with wet-finished cobblestones, neon lights and a Japanese bakery on your right.  There is a small arcade game room on your left and further down the street is the licensed bar and DJ booth.  At the very end is Tokyopolitan and their Japanese wood-fired pizza oven – our reason for waking up that morning.

The space is fun, quirky and original.  It’s not your conventional restaurant space – there is a lot going on, and because of that, it takes on the atmosphere of a fun, lively street party.

Mistakenly thinking that Akiba would be quiet on a weekend lunch, we walked into a buzzing restaurant filled with families and friends.   I was almost upset that so many people had found it already and for a minute thought they might actually be filming a music video there – which would have been awesome. 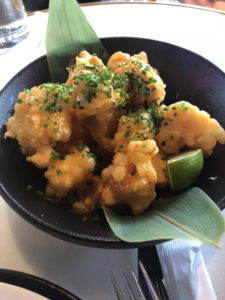 We were greeted by a friendly member of staff, who gave the impression we should just sit wherever we felt like.  They didn’t seem big on formalities.  We sat halfway down the street, and our waitress brought us over their menu.  A single card with salads, Japanese street food, specials and baked goods on one side, and the other size dedicated to their Tokyopolitan pizzas.

We ordered the Akiba rock shrimp with a spicy mayo sauce, some Akiba sliders, and a Margherita pizza.  The waitress explained that it’s a sharing restaurant and the food will come out when it’s ready.  I don’t know why restaurants still bother explaining this anymore.  At this point, restaurants should only highlight if it’s not sharing style.

As we were waiting for our food to arrive in a random order, we watched Chef Luigi stock his pizza oven with some more wood.  The Serb commented how delicate and careful he was with his oven.  I didn’t want to say it was probably because the oven was bloody hot, not because he felt spiritually connected to it.

Although, some do say if that Tokyopolitan’s oven ever goes cold, D3 will fall. 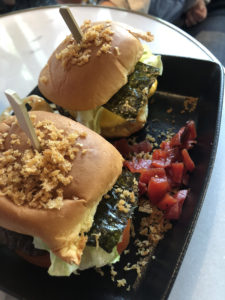 The sliders came in pairs, which is good because most sharing food comes in odd numbers which ironically makes sharing equally very difficult unless you are in an odd numbered J-pop band.  The sliders were not bad, but I’ve had better.  In a nod to their Japanese roots, they came with a sheet of nori and were sprinkled with panko breadcrumbs.  Both were un-necessary for me and were there just for the sake of it.  The bread was also a little too toasted and could have been softer.  Having said all that, the beef was of excellent quality, and the cheese was generous and melted perfectly.

The Akiba rock shrimp are similar to your dynamite shrimp made famous in places like P.F Changs and Cheesecake.  Surprisingly, Akiba is cheaper than both of those places for this dish.  Our bowl arrived with a mountain of lightly battered shrimp glistening in a tangy mayo sauce.  Did I mention, it was a mountain of shrimp?  If the Marina Fisheries Department ever need to tackle overfishing of shrimp, the first person they should pull in is Akiba Dori’s chef.  The shrimp themselves were well cooked, the batter offering the slightest of crunch and the spicy mayo sauce coating your mouth with a velvety heat.  An excellent dish.

Then came the Margherita pizza.  A pizza, so important it came with its own table.  Also, because our table was full and the pizza didn’t fit.  NB: small tables and sharing menus don’t mix well. 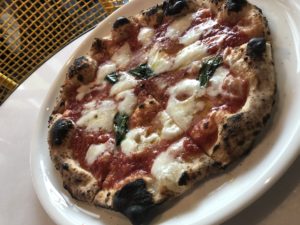 Tokyopolitan’s Margherita was up there with the best in town.  Chef Luigi is a born and raised Naples boy, formerly from Rossovivo, and has recently trained under one of Tokyo’s best pizza masters.  Our pizza was charred perfectly, and in true Neapolitan style, was soft, elastic, tender and fragrant.  Even with something as simple as the Margherita, there is a crescendo of flavours and smells happening, from the intense smell of baked dough to the slight hint of acid from the San Marzano tomatoes and mozzarella to the added saltiness of the crust.  From the subtle touch of fruit and spice from the olive oil to the grassy freshness brought by the basil leaves, there is so much to appreciate on something so simple.

We ended with their Dolce Luna dessert – vanilla ice-cream cooked in pizza dough drizzled with Nutella.  It sounds amazing, and I wish I could tell you how it tasted, but I can’t remember, because my subconscious has erased my experience of it as a protective defence mechanism.  You see, the Dolce Luna is the most phallic looking dish I’ve seen this side of Patpong.  Seven inches long, two inches in girth, with a controversial curve to it, this dish could star it its own movie.  Imagine sharing this with your boss. Or mother?!!  I can barely look the Serb in the eyes now, let alone anyone else.

The superstar of Akiba Dori is their pizzas, they could easily compete with any pizzeria in Dubai.  The rest of the food is a collection of good and average, and I think there will be improvements and changes made as they go along and mature as a concept.  The alcohol license changes things for them, and with a bottle of grape coming in 99 dhs and a pint at 37 dhs, they seem to have got their pricing right.

The service is quite relaxed and casual – I can see them getting a little stretched when busy, but they are approachable and down to earth.  The vibe is what makes it – carefree, egalitarian and energetic.  I recommend you head down there and see for yourself.  You never know, they might be filming a Bollywood/J-pop music video. 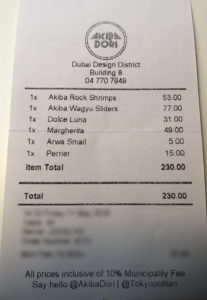