Back in 2009, at the Sasquatch music festival, one man, without fear of judgment or failure stood on a crowded hilltop and started dancing.  For a while, it looked like he was going to be remembered as the weirdo dancing man, but then something magical happened.  A second person joined him and then a third and fourth. Soon enough, the whole hillside – hundreds of people were dancing to his beat, and this solitary figure, with his bravery and conviction, had started a movement.  According to legend, he is still dancing on that hilltop today.

There is a movement happening in Dubai – chefs and restaurateurs are breaking free from the safety of hotels, franchises and celebrity mentorships and are creating a movement – a portfolio of independent, quality destinations that resonate with Dubai’s community.

3 Fils joins this growing list of rogue, breakaway concepts that are re-defining the landscape of Dubai. Former Zengo chef, Akmal Anuar, is behind the menu of 3 Fils and it gives him a great stage to showcase what he can do, unshackled, so to speak.

3 Fils is at the end of the wonderful, quiet and quaint little marina in the Jumeirah fishing harbour, deep in Jumeirah 1.  A throwback to the old-school expat days when real estate agents kept it real and you had to call your wealth advisor, not the other way round. 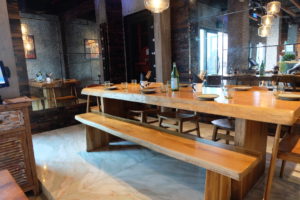 The restaurant is a small, compact and intimate space – twenty seats inside and maybe ten more outside.  The menu is tight and manageable – twenty-one main courses, with a handful of specials.  Everything is compact and without excess. Being neither compact or without excess, I stuck out like a sore thumb.

The steel grey concrete walls, distressed mirrors, and dark woods create an atmospheric space that looks just as good during the day as it would in the evening.  It is tastefully done without trying to make any over the top statements.

However, the menu is a single card that doesn’t quite fit with the rest of the concept, if I was splitting hairs – which I clearly am.  It is cartoonish and illustrated, where the actual food is sophisticated and crafted.  It is the only concept disconnect that I noticed.  It is unlicensed and this place would do wonders with a cold Asahi Dry or Sapporo. 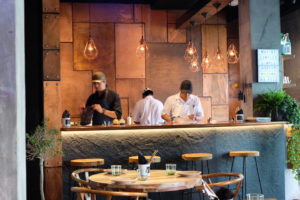 We were seated by a very friendly and enthusiastic waitress who, as soon as she learned we were 3 Fils first timers, launched into a tirade of information.  I couldn’t keep up with a lot of it, but I do remember that there was an IPad produced at some stage, and she used the word ‘circumference’ when talking about a chicken slider and promised to keep us informed with status updates from the kitchen as and when she got them.  I think she might be a lab research student during the week and server at the weekends. She was awfully nice, however.

We ordered seven items, having been told that five items were not going to be enough.  The food is described as “Asian food with Japanese influences,” which might have made sense if there wasn’t a chicken slider, beef tartare, triple cooked chips and beef carpaccio on the menu.  Several very un-Asian food items.  A better description would be, “Food with Asian flavours. And some Sushi.”  However, that is why I don’t work in marketing.

There were not many options for vegetarians, and although there were a few lighter choices like the torched yellowtail, most the menu had a lot of meat, fats, sticky sauces, and marinades.  If you are a vegan, keep walking – there is nothing for you to see here. 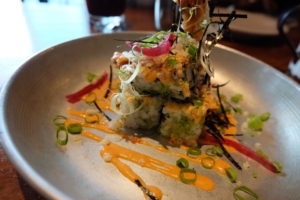 Often, small spaces are associated with high energy and a sense of urgency from the team.  Tables are turned, food is pumped out, staff are hustling, and the energy is dynamic and uplifting.   Perhaps because it was a lazy weekend lunch, and they didn’t need to turn tables, but there was certainly a very relaxed feel to the place and a rather laid back pace to the whole proceedings.  We had a slightly long wait for the food to start arriving.

The sushi made it to the table first, with an explanation that the sushi is always first out the blocks because the counter it’s made at is at the front of the kitchen.  The rest of the food is prepared at least two meters further back, which is virtually a different time zone, so will always arrive a little late.  Totally understandable.

The food arrived in a slightly ill-timed order, (probably due to the confusing kitchen time zones) but they were well presented, sharing (obviously) and the portion sizes were reflective of their prices.  The sushi was on point – structurally sound, maintained its integrity and had enough popping and crunchy bits added to keep it interesting. 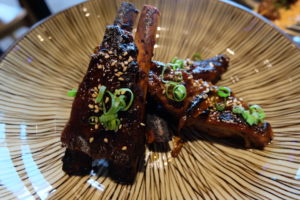 The lamb ribs were sticky and sweet and fell off the bone after just a single gaze from the Serb.  The chicken slider was a little winner – A Martin’s bread roll, juicy deep fried hot chicken with a crunchy crust and a perfect circumference.

The Russia Wagyu (I don’t know either – I thought Wagyu came from a Japanese breed) was thin and fatty – not my favourite dish and certainly not of a quality you would expect from a Wagyu breed.  The bone marrow jus added a welcome umami depth to the plate however, but the meat for me fell flat. 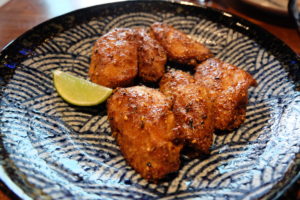 The Indomie dish is named after the instant packet noodle of the same name, popular in Indonesia.  It is a clever take on a comfort, staple item – spiced chorizo, spring onions and instant ramen noodles.  A fun, quirky addition to a solid menu I guess, but it’s still a 30 dhs ramen noodle.  There are better dishes to spend your money on.

The chicken wings were spicy, sweet and of a uniform generous size.  They were also juicy with a great flavour balance between sweet and hot.

By the way – seven dishes was a lot of food for two people.  We would have left happy with five dishes.

I asked the Serb for her thoughts on 3fils when we were in the car.
“They make the complex, simple,” she said.
“You do know that is literally their tagline.  It’s written on the door of the restaurant.”  I asked.
“Yes, I know,” was her response.
“And you’re sticking with that?” I asked.
“Yes.” She replied and put her sunglasses on.  Who am I to argue with that?

If you want my 2 fils worth on 3 Fils, I think Chef Akmal should be very proud of what he has achieved.  The space is casual with a touch of the dramatic.  The setting is fantastic, overlooking the fishing harbour.  The staff are engaged, if not scientifically skewed, and the food is inventive, unpretentious and accessible. I look forward to Chef Akmal reinventing more dishes and offering some more vegetable dishes and slightly lighter options in the future.

I think you should get down there before the summer heat kicks in. 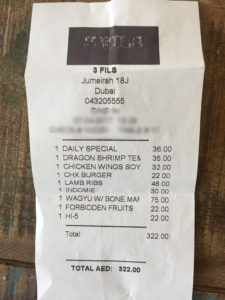