I found myself in JLT again the other night, on the lower level walkway, next to the now glistening lakes, with small independent restaurants that seemingly go on for ever, as far as the eye can see.  Out of sight from the street level polish is the JLT underworld.  Every type of food exists here – tacos, cakes, Desi food, Thai, Ethiopian, vegan, pizza – whatever your habit, there is someone selling, whatever your itch, someone will scratch it.  It is not glamourous, or slick, or glitzy, but it is real – it is a destination that over time, has developed a character of some strength and vibrancy. 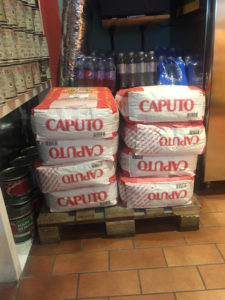 Pitfire Pizza had no guests when we arrived, yet it was extraordinarily busy.  You see, Pitfire Pizza JLT is all kitchen.  Quite literally.  They have a single table with three chairs squeezed up against their vegetable storage and drinks fridge.  There is standing room for another three and that’s your lot.  Such is their lack of space; they use their outdoor tables to store stacks of back up pizza boxes ready for the evening’s business.

As luck would have it, their single table was empty when we arrived.  We sat down, and a friendly server walked the half step from the counter to our table.  She gave us the menu and informed us that there would be a twenty-five-minute wait for pizzas that evening.

Pitfire specializes in what is self-described as a blend of Neapolitan and New York pizzas.  Quick FS pizza lesson.  Neapolitan pizza has a large airy crust that usually chars up slightly and an extremely thin base that means it’s difficult to eat with your hands.  New York pizza, on the other hand, is also quite thin, but much sturdier needs to be hand held, yet folded because that’s how New Yorkers eat their pies.  This is because Italians take their time when eating, knowing that a siesta (technically, a riposo in Italy) is on its way and New Yorkers eat in a hurry because being a New Yorker is busy work. 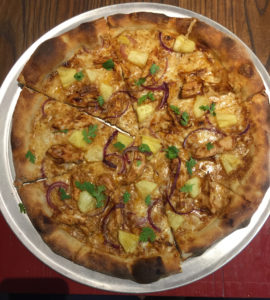 Pitfire offers a range of signature pies, a build your own section and by the slice choices as well.  They also do pasta and salads but don’t waste your time there. The pizza is where it’s at.

Pitfire is not trying to get too clever with their toppings.  They are inventive and on trend without being artisanal or hipster.  Although, they do have a pizza called The Hipster, which now makes my previous claim quite awkward.  However, the point is, if you want a quinoa and kale pizza on activated charcoal crust, try somewhere else.  They have items like Bill’s Special and Hell’s Kitchen along with more classic versions, such as Royal Hawaiian and Pepperoni Primo.

The Serb is as predictable as Dubai’s weather in August – she went with her tried and tested bresaola and rocket pizza which is a mainstay on her delivery app at home.  I think they only have sweet sour chicken, burgers and bresaola rocket pizza back in Belgrade because it seems that is all she ever eats. 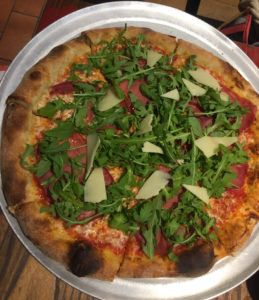 Delivery drivers came and went, the door banging heavily behind me every time, the AC struggled against the heat outside, and the restaurant’s decoration was bags of flour and tins of tomato.  In any other restaurant, you would think it was a purposeful display, but here, it really is because they don’t have anywhere else to store anything.

The pies arrived, piping hot and fresh from the oven.  The crust had puffed up, as promised and there was some encroaching char that added to the texture and flavour.  These pizzas looked the bee’s knees.  There was nothing machine made or cooked from frozen about them.  They were honest, authentic pizzas.

I lifted my first slice, and it held firm, the thin base supporting the toppings with just the merest hint of a bend.  Perfect.  As I write these next words, I am salivating like Pavlov’s dog.  The flavour was magnificent – the spiciness of the BBQ chicken, the sweetness of the pineapple and the sharpness of the onion.  Just when your mouth gets used to this combination, the fresh coriander jumps in like an over eager Labrador and brings a whole different level of love to the slice.

The Serb’s pizza was equally well cooked and put together.  I tried a slice – for the benefit of this review, obviously.  Their tomato sauce is light, slightly sweet and well seasoned. 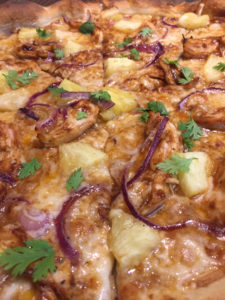 You would think, being the only customers in the place, it would be odd and rather exposed, but the Serb and I found a decent level of privacy amongst the chaos and just for a fleeting moment, I wouldn’t have wanted to be anywhere else in the world with anyone else.

Halfway through my second bite, a chef approached our table (leaned over the counter), to inquire about our food, or so I thought – but was, in fact, to ask to pass him a couple of onions and some garlic from the vegetable basket next to me.  A bit later I had to fetch a bottle of water, (still, small) for another customer who came in for an order pick up.  It felt good – like I was part of the team.  I think that’s what they mean by ethical eating.

The Serb and I were there for an hour, and I counted about 40 pizza being delivered (I’m such a fun date) which means, Pitfire would have sent out over 300 pizzas that evening.  That’s pretty good going and a testament to their popularity.

We eventually asked for our remaining slices to be boxed up and vacated the table.  There were another two guests that had just ordered, and they deserved to be able to sit and eat their pizza too.

The malls of Dubai, with their carefully managed optics and sterilized positioning, pale in comparison to the vibrancy and pulse of somewhere like the JLT underworld.  Behind every one of these restaurants, there is a story, a past or history that if you’re lucky comes out in the cooking and food and at the very least is etched on the faces of the cooks and servers as they go about their business.

That’s why it makes perfect sense for Pitfire Pizza to find a home here.  A pizza parlor that comes with a story, some history, and baggage that makes for a damn fine pizza. Perhaps the best pizza in Dubai. 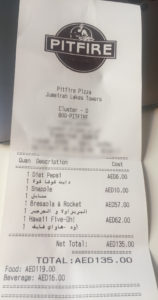 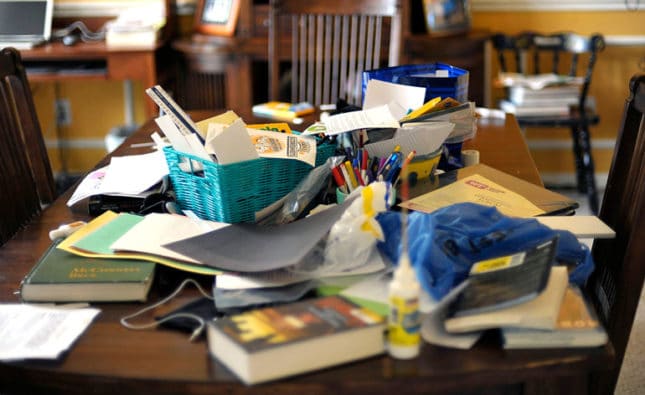