The latest Belgium inspired restaurant to open its doors in Dubai is Le Petit Belge.  The Little Belgian. It’s a cute name, and I had visions of Tin Tin and Snowy welcoming me at the door and a bunch of Smurfs running around with bottles of Duval and bowls of Moules.  Yes, I did just horribly stereotype using fictional characters and food.

We, of course, have Café Belge and several versions of the Belgium Beer Café already in Dubai.  Here’s the thing with Belgium restaurants though – there is only so much you can do with the concept.  Belgium is a very small country with few select (yet delightful) cuisine choices that could make it onto an authentic Flemish menu with any credibility.

The only saving grace is they borrow generously from the surrounding countries – namely the Germans, Dutch and the French. However, borrowing anything from those three countries is like borrowing something from an awkward co-worker that never lets you forget it.  Even after you have given it back.

The Belgians have a pretty good shout for being the birthplace of fries. Or frites.  There is evidence that the Belgians have been eating deep-fried chipped potatoes since the 1680’s.  The reason they are called French fries is thanks to the American soldiers during the First World War.  Like most Americans traveling through Europe, these soldiers didn’t really know where they were and ate them while thinking they were in France, when, in all probability, they were already in Belgium.

Right, so that’s the Belgians, French, German, Dutch and now Americans that I have upset in just three paragraphs!  Let’s keep going, shall we?

I can see exactly what LPB is trying to do with the space, which is in a basement location in the Pullman hotel in JLT.  JLT is becoming known for their subterranean F&B.  Like all restaurants, LPB is looking for a hook – a talking point, something that allows them to stand out from the four other Belgium cafes in the city and their other competitors. 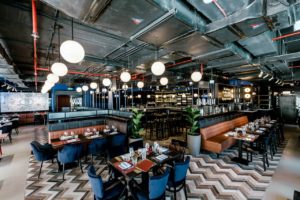 However, Le Petit Belge confuses me.  They have a traditional Belgium inspired café, with globe lights, subway tiles, banquette seating and retro cool signage.  But they also have electric blue walls and random quotes in neon blue lights that have no reference to Belgium or its food.  They also have odd decals on the walls that are obscure references to Belgium that look like something out of a children’s sticker book and they have a hint of an industrial feel as well.

We entered into a semi busy restaurant and were immediately seated by a friendly hostess.  Our table was in the corner, a banquette next to a rather overpowering blue neon light.  It would have stood out in Times Square such was its wattage.  It was a quote that said, “Fortune favours the brave.”  I hope that’s not in reference to their food.  Maybe they get it flashing during ladies’ night to help with the mood.

If I was to pigeonhole LPB, they are a cross between Coquley, Crown and Lion and Belgium Beer Café.  Our waitress wasn’t from Belgium, but she had a big smile and was enthusiastic and friendly.  We placed our order immediately for some famous frites and some Belgian abbey cheese croquettes with a sweet pear syrup dip.

We also ordered the coq au vin, and the carbonnades a la flamande, which is a Flemish Stew.  Nothing better for a hot June day in Dubai than a thick beef stew and a slow cooked chicken in red wine sauce.

The cheese croquettes, however, were outstanding. Six little bite sized balls that were light, crispy and loaded with cheese.  They were a delight to bite into and were made even better with the sweet, sticky pear syrup dip.  A good opener to the meal.

The frites, unfortunately, would have made those American soldiers turn around and go back to where they came from.  They were without seasoning and decidedly average.  True Belgian fries rely on a few key points that can’t be compromised on.  The quality and age of the potato is the first one.  Funnily enough, the older the potato, the better the fry.

They must be cooked twice.  The fries then need to cool down completely and fried once more before serving to ensure they get that famous crispiness.  If you get the first frying wrong, (oil temperature, number of fries in the basket – it is fraught with danger) the second fry cannot correct any mistakes.  Finally, it needs to be cooked in animal fat.  That is when the starch bonds with the flavour of the fat and the Belgian frites become world famous.

I think LPB skipped a couple of steps. Somewhat disappointing.

The Flemish stew was served in a small cassoulet bowl with some more non-Belgian Frites, and the Coq au Vin arrived in an iron skillet like a Frenchman in a Peugeot.

Have I mentioned the blue neon light? Did I mention it was bright? Like Times Square bright? Well, because of this Times Square blue neon light right next to our faces, the whole meal experience took on a rather purplish hue.  It was very distressing, especially for the chicken.  The chicken suffered, particularly as it was garnished with a small purple edible flower as well.  Luckily the flavours were not compromised, and overall the presentation was good.

LPB’s carbonnade was enjoyable, but for me they missed that delicate sweet and sour element that makes the stew so good.  A good carbonnade relies on the deep dark flavour of abbey style beer, but what really gives the dish its distinctive flavour is the brown sugar and cider vinegar.  The result is a sweet and sour combination that plays beautifully against the onions and the rich beer. Having said that, the beef was tender and cooked well, and the chef managed to coax some good layers of flavour out.

The chicken was also well represented – generous pieces of leg and thigh, layered with the rich aroma of wine, earthy mushrooms, and sweet onions.  It’s home cooking done well and with the right price point.  It had a good sweetness to it, and the meat was juicy and flavourful – not easy to get right when slow cooking meat.

We finished up with the chocolate mousse which was outstanding. Not too sweet, with good consistency.  The mouthfeel was a thing of beauty and they cleverly mixed in some biscuits bits to give some texture to the mousse.  After one mouthful, The Serb announced she didn’t like it very much, and I feigned suitable sympathy.  Then gleefully finished off her portion.

LPB has tried to redefine a Belgian Beer Café, and I am not sure if I am convinced with their interpretation of it.  However, they are well priced with an attractive bar serving good beverages and a solid kitchen that delivers quality home cooked style food.  It has a good atmosphere with an efficient and professional service team.

LPB is a nice, licensed, casual dining addition to JLT.  I hope the local community gets behind it – they are worth it.  If not, they can always sell that neon light to Times Square. 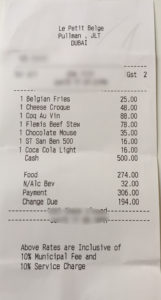